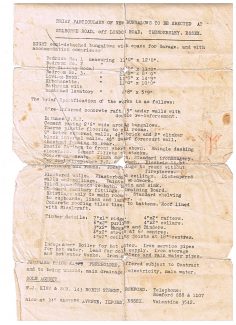 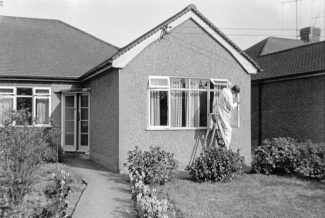 Recently when going through some old paperwork of my Father’s I came across the builders offer for the bungalow that we moved into around 1956. I am not certain of the exact date since I know I had already started school in Romford but only went for a few months prior to us moving. Also attached a photo of my father painting windows which I guess must be in the early 60’s.

My father lived at 16 Selbourne Road until he died 8 years ago. I moved out when I got married in 1972 but did not move far since next door had become vacant so I moved into 18 Selbourne Road and lived there until we uprooted and moved to Germany.

Interesting is the pricing from the original GBP1975 in the mid 50’s the price had risen to around GBP5400 when I purchased number 18 in 1972. This had risen again to around GBP35K when we sold number 18 around 1983 after we decided to buy in Germany. Eight years ago when acting as executor for my Father’s estate we were at GBP235K. Mind you I guess wages have risen as well over the same period.