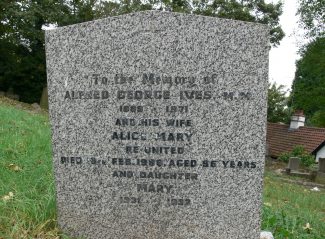 Alfred George Ives M.M.  death record shows his date of birth as the 22nd September 1889. His parents were George and Martha Ives who lived in London. The 1911 Census shows he was a shirt cutter living in Plaistow.

Alfred George Ives joined up on the 27th November 1915 and was assigned to the 2nd/12th Battalion of the London Regiment. His Service No. was 5170 which was later changed to 472163. The Battalion spent a lot of time in the UK before sailing to France on the 4th February 1917 and landing at Le-Havre.

He was promoted to Lance Corporal on the 9th October 1917 and subsequently to Corporal on 26th April 1918.

For exceptional bravery sometime in 1918 he was awarded the Military Medal. He was Gazetted in the The London Gazette/Supplement issue dated 29th August 1918 (page 10125). He was also awarded the British War Medal and Victory Medal after the war.

He received a severe gunshot would to his right thigh that caused a compound fracture of his Femur bone. It is highly likely that this occurred on 26th September 1918. He was then invalided home to spend time in  the Third Southern General Hospital in Oxford.

He was discharged from service on 28th March 1919 under Kings Regulations Para 392 (xvi) which means he was no longer physically fit for service. To show this to the public he was given a Silver War Badge on 31st May 1919.

He then got on with life. In the third quarter 1925 he married Alice Mary Hulls in West Ham.  The 1929 electoral roll reveals that Alfred George Ives and Alice Mary Ives, lived at “Clovelly” St. Mary’s Drive, Benfleet. They had two sons Donald and Malcolm, and a daughter Mary who died as a baby (shown on the picture of the tombstone).

He died in late 1971 aged 82 and his death was registered in December of that year.