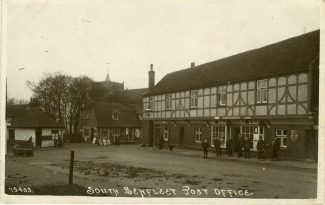 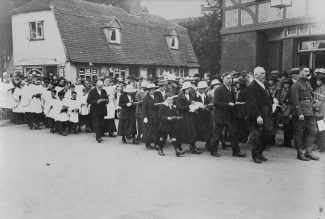 zoom
The party marching to the ceremony on 30th May 1920. 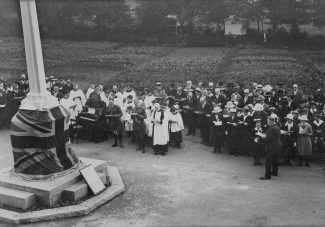 zoom
The War Memorial covered with the flag. 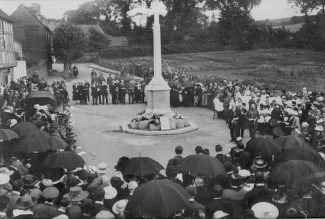 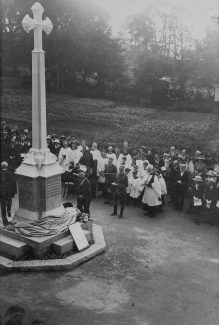 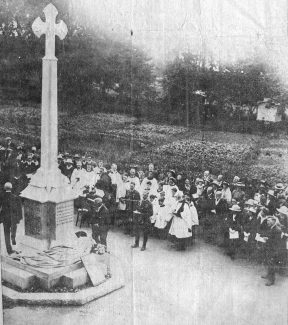 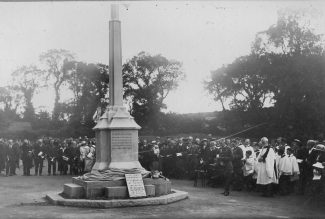 zoom
The unveiling party leaving. The crowd staying despite the rain. 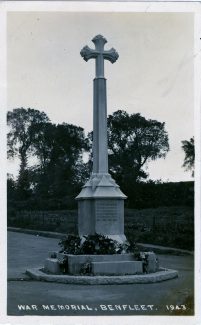 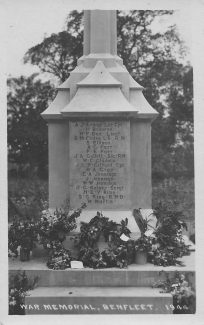 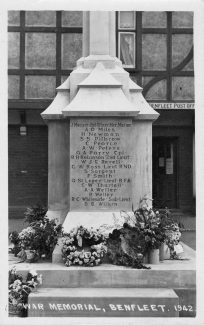 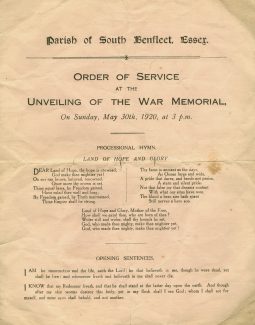 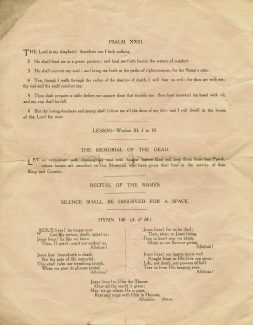 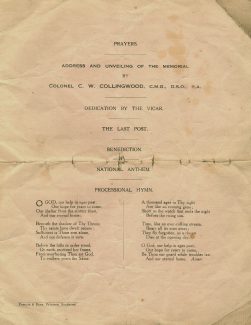 The memorial commemorates the men of South Benfleet who were killed in the 1914-1919 World War.  The cost to manufacture, transport and erect it was made possible by public subscription.  It was designed by the architect, Sir Charles Archibald Nicholson, (1867-1949).  Southend Stonemason, Percy Delf Smith, (1882-1948) was responsible for its creation and carving the inscriptions.  Constructed of Portland stone it once stood within an octagon of Cornish granite and stands in Essex Way, opposite the Anchor Inn, the building where at one time Benfleet Post Office was situated.

On Sunday 30 May 1920, the unveiling ceremony started with a choir marching in procession from the Parish Church singing the hymn ‘Land of Hope and Glory.’  The Vicar, Reverend Arthur Holthouse. M.A., read the opening of the Burial Service and continued with the following tribute for the dead.

“Let us remember with thanksgiving and with honour before God, these men from this parish whose names are inscribed on this memorial who have given their lives in the service of their King and Country.”

Mr. W. G. Smith, Secretary of the Memorial Committee then read the names of the men listed on the memorial:

The memorial was then unveiled by Colonel C. W. Collingwood. C.M.G. D.S.O.  R.A., of Shoeburyness Garrison.  In a short address he expressed his admiration that a little village like South Benfleet sent so many men off to war and understood that 25 per cent of them had fallen and it was their spirit that made England what she was.  In conclusion he expressed the certainty that those to whom he had just unveiled would never be forgotten by the people of South Benfleet and that their memory would be carried down from generation to generation.  The Vicar then dedicated the memorial.

Under the direction of S. M. Woodlands. Royal Field Artillery., buglers from the Shoeburyness Garrison, rendered the ‘Last Post’ and ‘Reveille.’  Everyone in attendance then sang the National Anthem.  The choir returned to church in an orderly procession singing the hymn, ‘O God our Help in Ages Past.’

On behalf of all members of the War Memorial Committee, their secretary, Mr. W. G. Smith, expressed their thanks to the designer of the memorial and to Mr. T. Chambers who donated the site.

The memorial was designated Grade II Listed on 28 February 2008.

Note 1: This page updated with links to those fallen, the addition of S.Sargent and more photographs on 21st May 2020.