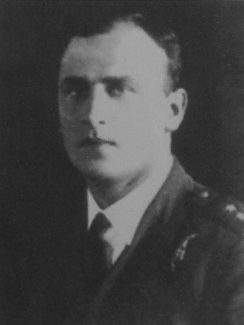 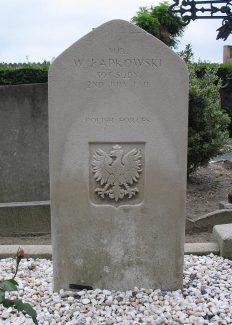 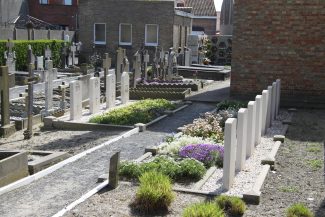 Pilot Officer Waclaw Lapkowski, was born on 6 November 1913.  Before the start of World War 2 he was serving in the Polish Air Force and at the outbreak he was with it’s 112 Squadron.  Wishing to support the British war effort against Germany he made his way to England and joined 303 Squadron based at Northolt.

On 5 September 1940 he was pilot of Hurricane P2985 and while in the in the sky over Gillingham, Kent, he was shot down by a Me109 (Messerschmitt).  He bailed out and landed at Hawkwell, Essex.  Suffering from a broken leg and burns he was taken to Rochford Hospital, Essex.  His Hurricane crashed on Bonville’s Farm, North Benfleet.  After recovering from the injuries he went on to fly in more combats.

His bravery recognised he was awarded Polands highest award for valour, the the VM ‘Virtuti Militari’ 5th Class, (gazetted 23 December 1940).   In 1941 he was awarded the KW ‘Kryz Walecznych’ Cross of Valour (gazetted 1 April 1941).

On 2 July 1941, while leading 303 Squadron in Spitfire B8596, escorting Blenheims to Lille, they were attacked over the English Channel by fifty Messerschmitts.  His Spitfire was shot down and Pilot Officer Lapkowski was killed.  His body was washed ashore and taken to the Lombardsidje Communal Cemetery, Belgium, for burial.

An additional picture is on the Air Crew Remembered site.