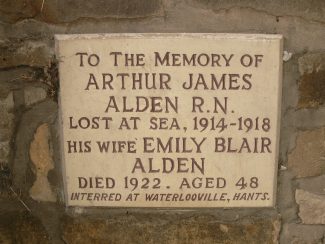 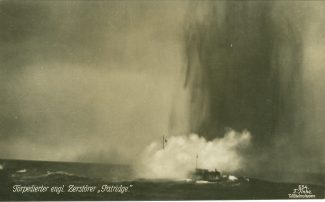 The Memory Plaque on the wall of the Lychgate entrance to St. Mary Church.  South Benfleet.

H.M.S. Pellew and H.M.S.Partridge were “M” Class Destroyers escorting a British convoy of the following ships to Bergen.

Although the Cordova was a British registered ship the others were neutrals, two Norwegian, two Swedish and one Danish.  Germany had previously declared that all ships sailing under the protection of the British Navy would be classed as enemy vessels.

The German Navy decided to repeat a successful attack on British shipping that occured on 17 October when their fast Light Cruisers, Brummer and Bremse attacked a convoy 65 miles east of Lerwick and sunk two British Destroyers, the H.M.S. Mary Rose, H.M.S. Strongbow and nine merchant ships.

German Navy Lieutenant-Commander Heinrich Kolbe sighted the convoy and prepared three of his ships to attack the destroyers.  A fourth ship was ordered to sink the merchant ships.   About the same time H.M.S. Partridge sighted the four German boats but due to a defective searchlight was unable to make an immediate challange and the delay allowed the German ships to close in.  At about 12.15 p.m., H.M.S Partridge was hit by gun fire that damaged the high pressure steam system causing the turbines to stop.  Now crippled an lying dead in the water she was hit by two torpedoes.  Her Captain, Lieutenant Commander Reginald Hugh Ransome gave the order to abandon ship.  Survivors were picked up by one of the German ships and taken into captivity.  They were allowed to dry their clothes in the engine room and were given rye bread and raw bacon to eat.

The bodies of four men were recovered and taken to Norway for burial the Fredrikstad Military Cemetery.  Another body had been washed ashore and was  buried in a village cemetery.  In 1961 the body was removed and taken to the military cemetery.