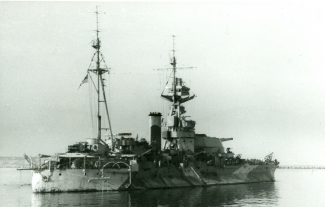 H.M.S. Roberts was built by John Brown & Company.  Clydebank.
She was launched on 1 April 1942 and in November provided support for Operation Torch, the invasion of North Africa.  She was attacked by enemy aircraft and damaged by two 500lb bombs.  Seventeen men were killed in the bombing.  The ship was repaired and continued to support the war effort, after which, although sold for scrapping it was hired by the Royal Navy as accommodation at Devonport.  Eventually, having no further use it was broken up at Inverkeithing, Scotland in July 1965.

In 1967 the Imperial War Museum acquired two 15″ Naval guns, one of them from H.M.S. Roberts.  In 1968 both guns were mounted outside the main entrance.