To Alexandria and the Far East 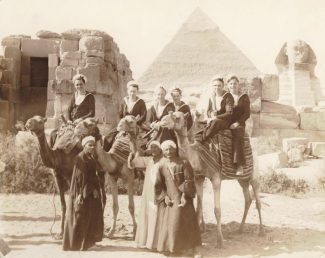 zoom
On Shore Leave in Egypt with ship mates 3rd Dec 1943. Mr Joyce is on the 1st camel on the left.
Mr Joyce's collection 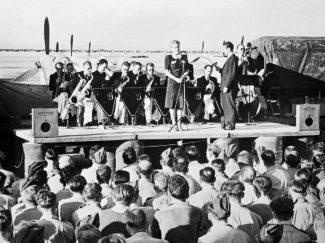 zoom
Geraldo and his orchestra, fronted by the singer Dorothy Carless, entertain airmen at an airfield in North Africa, 1943.
This is photograph CM 5442 from the collections of the Imperial War Museums

After supporting the  Arctic Convoys HMS London was sent to Alexandria to ferry support staff for the Tehran Conference. Also on board ship was Geraldo’s Orchestra who were going out to entertain the troops.

The band was very popular and appeared in the film “We’ll Meet Again” in 1942. On this voyage Mr Joyce became friends with Maurice Berman the drummer. He also describes being on leave in Alexandria.

After a refit in Rosyth, HMS London was assigned to the Eastern Fleet. Mr Joyce describes the trip though the Suez Canal and trips from Trincomalee in Sri Lanka to Fremantle in Australia. During these trips he traded opals.

The ship then went to Simonstown in South Africa for a refit. After this it was back on patrol and he describes the sinking of Admiralty Floating Dock 26 in Trincolmalee on 8th August 1944.

After this Mr Joyce describes the Japanese Surrender in Sabang in Indonesia on 31st August 1945.

He then describes visiting Sydney and Tonga.

The dates were taken from a copy of a document prepared by a Commander on HMS London during 1946.

Mr Joyce received several medals for his service including a Russian Ushakov medal in 2014.