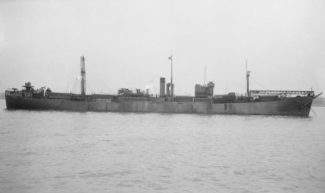 The S. S. Empire Heath with a compliment of 58 crew was on route from Victoria Bay, Brazil, to Loch Ewe, Scotland, when she was torpedoed by the German U-Boat 129.  57 of the crew were killed. Seventeen of those killed were teenagers.

The Chief Steward, Frederick Wakeham, was capured, taken as a prisoner of war and incarcerated in the Marine Internieten Lager (MILAG) Camp, Germany.