Died aged 17 at the Battle of Ancre 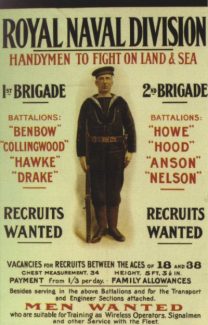 The Battle of Ancre ran from 13th to 18th November 1916 and was the final attack of the Battle of the Somme. Able Seaman Stanley Gordon King (13) took part in this battle as a member of the RND Hawke Battalion and died aged 17.

According to the records he was born in Edinburgh on the 4th June 1897. However one of our site visitors, Derek Hill, has pointed out some discrepancies in his birth date. The 1911 Census shows him as 11 years old and the 1901 Census shows him as 19 months old. This suggests that his birth date was about September 1899. The 4th June date is also not certain but it is consistent with him joining up on 21st June 1915 making him just 18 according to the birth date he gave to the military. In reality he was just 15 years and 9 months old when he joined up

According to the 1891 Census the family consisted of three sisters: Elizabeth Keeves age 26, Emily Keeves aged 22 and Margaret Keeves aged 19.  They lived at 154 Grove Road in Bethnal Green. The record is confusing as it asks their relationship to the head of the family which is daughter, but he or she does not live in the house.

In the 1901 Census the family have moved to 5 Albion Road in Prittlewell where the women are all dressmakers. The record is confusing as although Elizabeth’s age is correct , Emily’s is is shown as 36 rather than 32 and Margaret is shown as 59 and not 29 – although there is a bar through the record suggesting the census taker thought it wrong. Crucially in the census Margaret is now shown as being married as Margaret King and having a son named Stanley King, born in Scotland, aged 19 months. The age suggest he was born in suggesting he was born in September 1899.

We have not been able to trace Margaret’s marriage record, Stanley’s birth record or why he was born in Scotland. We do not know who his father is. It suggests that Margaret was most likely a single mother who was abandoned and did what she could to preserve her honour and that of her son.

Stanley enlisted on the 21st June 1915, and was drafted into the Mediterranean Expeditionary Force (MEF) on 25th October 1915. He joined the Hawke Battalion of the Royal Naval Division (RND) on 2nd December 1915. At this time he just missed serving in Gallipoli as the troops were being evacuated.

He entered France in in May 1916 where the RND took part in the Battle of Ancre. On the 13th November 1916 at 5.45 a.m. the RND Hawke and Nelson Battalions attacked in mist  As they approached the German trenches they were attacked by machine-gun fire from a Redoubt. Hawke Battalion took very heavy losses with 400 officers and men becoming casualties mainly falling round the Redoubt. It is almost certain that this was when Able Seaman Stanley Gordon King (13) died of wounds aged 19 according to the official records. However we believe him to be under age so his actual age at death was probably 17 years 2 months.

At the time of his death his mother lived at 5 Railway Terrace, Benfleet.

A report dated the 28th January 1920 says that on the area near the battle there were 11 crosses, 8 of which had the names and numbers of servicemen. However when the Exhumation party dug down they found no bodies. This is why his gravestone is a special memorial with the phrase “Known to be buried in this cemetery”, even though the exact place has never been found.

At the bottom of the gravestone is the phrase “Their glory shall not be blotted out”, which was put on gravestones unless the person’s family had paid for something different. The phrase was suggested by Rudyard Kipling and is a line from the book in the Bible Sirach 44:13.

His mother would have received his war medals of the 1914-15 Star, British War Medal and Victory Medal. Despite being a Southend boy his mother ensured his name was on the Benfleet War memorial. She at some time moved back to 8 New Road. Leigh-on-Sea.