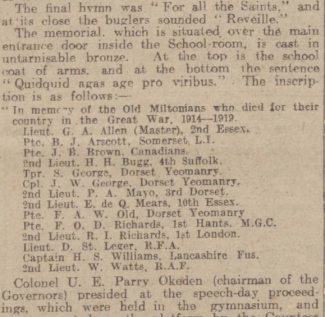 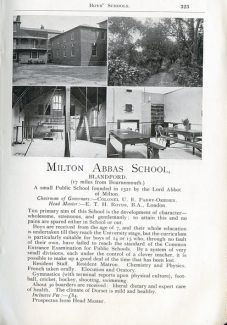 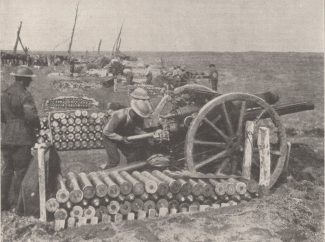 zoom
A typical 18 Pounder as used by the RFA. This picture is of an Australian gun crew in action in the Ypres sector, 28 September 1917
Public Domain from Wikipedia

zoom
A reference to Dennis St Leger's death in the War Diary of the Battalion (2/6 Sherwood Foresters (Nott's and Derby)) he was attached to as an Artillery Observation Officer.
From Niall Stoddart who is researching the War Memorials of Blandford schools 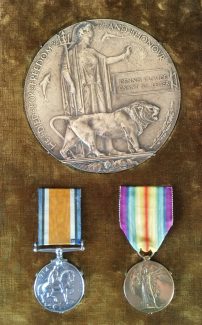 2nd Lieutenant Dennis Claude Grant St Leger (29) of the 295th Brigade of the Royal Field Artillery was born in Madras, India on 24th December 1892 to William Douglas and Helen Louise St Leger. His father was the  Organist and Choirmaster, St. George’s Cathedral. This was a post he took up in November 1877 and still held to at least 1915.

Dennis was the 3rd child of this marriage. His brother Douglas Francis Warham St. Leger (known throughout his life as Frank) was born on 30th May 1890, his older sister Helen Evelyn St. Leger was born on 4th October 1891 and his younger sister Claudine Ethel Leger was born on 6th February 1894. All were born in Madras.

It is almost certain that the family moved to England in early 1899. I have not found an inbound passenger List but I have found an outbound one which shows WD St Leger embarking on the RMS Massilia on 7th November 1899 from London to Karachi (sic). This suggests that the family had come to England earlier that year, been set up in a home and schools and then WD St Leger went back alone to India to resume his job.

In the 1901 UK Census Dennis, his mother and two sisters were shown as living at 38 Bolingbroke Road, Hammersmith. The oldest son, Frank, is shown as being at Milton Abbas Grammar School in Blandford in Dorset as a boarder according to this Census. It is very difficult to find any information about the school today as it closed in 1929. However it was founded in 1521 and moved to this site in 1787.

This is the school that Dennis also went to. We received a comment from Niall Stoddart stating that Dennis St Leger went to Milton Abbas Grammar School in Blandford in Dorset. The proof is a cutting from the Western Gazette of 23rd December 1921 reporting his name on a school war memorial. It was inscribed “In memory of the Old Miltonians who died for their country in the Great War 1914-19”. There were 14 names on it including “Lieut. D. St. Leger, R.F.A.” The memorial is now long lost.

In the 1911 census Dennis St. Leger is shown as living in England with his mother and family at 90 Uplands Road, Stroud Green, Hornsey and is a bank clerk. However his brother Frank is shown as being a teacher of music at the Royal Academy, his sister Helen is a student of Dramatic Art (most likely Opera) and his younger sister is a Musical student. Dennis may have had musical ability but it is not how he earned his living

Just before the start of the war the Dennis’s family all move abroad.

With both girl’s marriages it is likely that their mother was with them and so not in the UK.

Meanwhile Frank St. Leger was starting his stellar career. He became an accompanist on the piano to Madame Melba (Dame Nellie Melba). It is most likely he joined her in 1914. We can certainly locate them on the passenger manifest for the Makura which sailed from Sydney, Australia on the 5th August 1915. So he also had left the UK

Dennis would have been on his own in the UK. It is highly likely that he visited his uncle Hugh Anthony St. Leger at his lodgings in Albion Villa, Green Road. We also know that this was the address in Probate record for Dennis. This closeness would also account for why his uncle was instrumental in getting Dennis’s name on the Benfleet War Memorial.

However it is highly unlikely that lived with his uncle in Benfleet as the Territorial unit he belonged to was based in Lincoln. So by the time of his enlistment he was most likely working for a bank in Lincoln or the surrounding area.

Dennis St. Leger joined the Royal Field Artillery in the 295th (CCXCV) Brigade, which formed part of the 59th Division. This was based on the Territorial unit there. It suggests that St Leger was based in Staffordshire and likely in Lincoln.

He became a corporal. He then went to the Joint Royal horse Artillery and Royal Field Artillery No 1 Officer Cadet School in Exeter on a course that lasted four and a half months. He received his Commission as a 2nd Lieutenant on the 5th October 1917. The Commission was Gazetted on 23rd October 1917.

Lieutenant St.Leger was recorded as missing on 21st March 1918 and his burial return shows he was buried by German soldiers with a date of his death of 22nd March 1918. He was killed in action at the Battle of St Quentin on the 21st March, aged 25, when his position was overrun. The second Benfleet death on that day in the German Spring Offensive.

He was the liaison officer attached to the left battalion of the 178th Brigade to direct fire for the 295th 18 Pounder gun batteries. He was on the front line when the  Germans attacked and it was reported that he was severely wounded and subsequently died of wounds in a most gallant manner. Col. Hodgkin, the Battalion Commander, who was taken prisoner wrote of him:

Lieut St.Leger fought with a rifle all the time, and he was continually wounded. When he was taken alive, but suffering from a badly broken jaw and several wounds in the body.

A record of his death also appeared in the War Diary of the 2/6 Sherwood Foresters (Nott’s and Derby) Battalion to which he was attached to as an Artillery Observation Officer  (See War Diary extract).

Sec.-Lieut. D St. Leger (R.F.A.) died of wounds the following day. This officer, after the lines of his battery had gone, used a rifle until he was so badly wounded that he was unable to stand. St. Leger was several times wounded, and even when his jaw had been shattered, remained cheerful. He was a real hero.

The Germans buried him in Cagnicourt cemetery in the German extension. In 1924 his grave was exhumed and Dennis St. Leger is now buried in H.A.C Cemetery, Ecoust-St.Mein, France.

When Probate on his estate was registered in 1921 his executor was his father William Douglas St Leger an Organist. He was still in India at the time. He first sailed to Australia most likely to see his son Frank He then sailed to England on the Ormonde landing in the UK on 23rd February 1920. Sadly he died soon after on the 13th November 1921.

His war medals, consisting of the British War Medal and Victory Medal, were sent to his mother at either 6 Arsenal Road, Well Hall, SE9, or 5 Braidburn Terrace, Morningside, Edinburgh in 1923.

Lieutenant St Leger has been particularly unfortunate with having his name on war memorials. Although he is remembered on several of them there have been problems with what has been recorded.

Most likely the first one he was on is the Benfleet War Memorial which was unveiled on the 30th May 1920, where he was recorded as “D St. Leger. Lieut RFA. (Royal Field Artillery).” For many years this was displayed but at some time the lower part of the “G” fell off and he was “D St Leoer Lieut RFA”.

In 2014 when the War Memorial was being refurbished the BCA consulted with the Castle Point Council and his name was restored back to what it was.

He was on his old school’s war memorial but as shown earlier in this article this has long been lost.

On Monday 14th February 1927 a memorial tablet was unveiled in St Mary’s Church Stafford in memory of the men of the 59th Division, the second line Territorial Division of the County, to record the service of the Division in WW1. But this has only the names of the units and not the people.

Then there was the problem with his grave records as recorded by the CWGC. Unfortunately his registration in the records was as “St Ledger”, which made it harder to search for him. He was also not mentioned in the CWGC records as having been a member of the 295th Brigade of the RFA.

This remained a problem until the 2nd March 2017 when Lt Col RJ Binks who is “Keeper of the Rolls and Secretary to the Trustees of The Scottish National War Memorial” at Edinburgh Castle contacted the BCA. He informed us that Lieutenant St Leger was recorded on the Royal Field Artillery Roll of Honour in the Scottish National War Memorial by virtue of his being the son of a Scot (either his father or mother). This record is correct.

The Colonel then went on to contact the CWGC about the name anomaly on the same day, providing them with such evidence that was available. They replied on the 3rd March 2017 and accepted there was problem. They immediately changed the CWGC database and put in place a process to check the headstone when one of their works teams is on the site, and replace it if necessary. The replacement might take up to 18 months, but it would be done. This was an excellent result and the BCA thanks Colonel Binks and the CWGC.

As a result of the changes to the CWGC data base the record has changed from:

For the first time in a century when searching for the members of the 295th Bde. of the RFA who died on the 21st March 1918 his name comes up with the other 15 members of his unit who also died on that day, 14 of them on the Arras memorial and one other buried at the Vaulx Hill Cemetery.