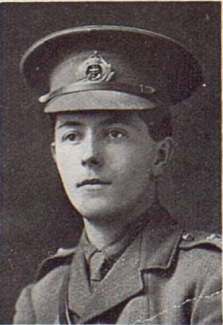 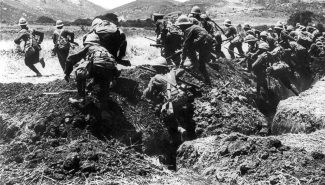 zoom
The Royal Naval Division during an exercise before the Battle of Gallipoli, 1915
This is created by the Government of the United Kingdom 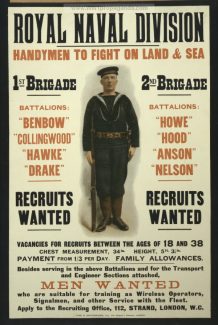 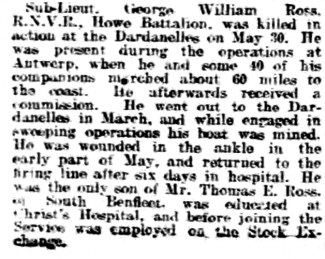 Sub-lieutenant George William Ross (5) was born on the 23rd Sept. 1890 in London and was the son of Thomas Ernest Ross and Amelia Matilda Ross (née Butcher). He had three younger sisters. According to military records he had browneyes, brown hair and a “lot of vaccination marks”.

When he was born his family lived at 37 Charles Street, Woolwich. This road was later rename d as the northern part of John Wilson Street. Here his father is shown as being a publican. However by 1899, at the latest, the family had moved to Benfleet living at at house called “Sea View”.

His mother died on 6th August 1899 whilst giving birth to his youngest sister Olive Ivy Ross.

His father had a business here called “Ross Wharf” which was a builders merchant.

According to the War Memorial at Christ’s Hospital School he attended this school from 1903 to 1905 (aged 13 to 15). He then went on to be clerk at the London Stock Exchange and his name is on their Roll of Honour.

The RND was an idea by Winston Churchill who was then the First Lord of the Admiralty. When the volunteer reserve were called up there were more people than was required by the Royal Navy. He decided to create the RND which consisted of the existing Marine Brigade and two new Brigades the 1st and 2nd. Each of these had four Battalions. The poster shows that Benbow Battalion formed part of the 1st Division RND.

The problem occurred with resources. There were few trained and experienced men, no uniforms and when they did receive weapons they had the old Charger Loading Lee-Enfields.

GW Ross was sent to Antwerp as a member of the 1st RND Brigade along with the 2nd Brigade on 6th October 1914 to assist in the defence of Antwerp. They were assigned to man the forts 1 to 8 of the inner ring.

As part of the defence plan it was decided that if forts 1 and 2 were lost the RND would withdraw at dusk. The forts had fallen by 5 pm and orders sent for the RND to retire. The 2nd Division received these orders and withdrew, but only one Battalion 1st Division withdrew.

By the time the rest of the 1st Division heard it was 9.30 pm. They made efforts to retreat but were blocked every way. The British commander, Commodore Henderson, decided to head for the Dutch Border. Once they crossed it he and 1,500 of his men were interned for the rest of the war.

However 40 of his men including GW Ross, according to a newspaper report, were stragglers. They marched 60 miles to the coast avoiding the German forces and eventually made it back to the UK.

The combination of these events had devastated the RND and it had to be rebuilt.

As a result he was discharged from Benbow Battalion on the 7th January 1915 and sent to HMS Crystal Palace, or more formally HMS Victory VI, to train to be an Officer. Crystal Palace was used to train all branches of the Royal navy during WW1 including the RND.

While there he passed a course as a Machine(?) Gun Instructor 2nd Class on 27th January 1915.

He was was transferred to the Howe Battalion of the 2nd Brigade of the RND on 22nd February 1915.

The RND embarked to sail to Lemnos from Devenport between 6th February to the 1st of March 1915. GW Ross was now part of 2nd Division and took part in four battles.

At The Battle of Eski Hissarli on the 1st and 2nd of May it is highly likely that it was then that he was wounded in the ankle and sent to hospital. The reason is that according to a newspaper report he returned to the firing line after only six days in hospital. This would be consistent with his taking part in the Second  Battle of Krithia which took place between the 6th to the 8th of May.

On the 4th June 1915 Sub-Lieutentant George William Ross (5) took part in the Third Battle of Krithia and was killed. He was 25 years old. His C.O. wrote:

Lieutenant Ross was badly wounded while in charge of a gun. Owing to heavy enemy fire, the order was given for his company to retire. Being unable to save the gun he destroyed it before retiring. Badly wounded in both arms and legs he dragged on behind at a distance of five yards when a shell burst and killed him.

GW Ross was a very brave man. There is no known grave for him but his name exists on four war Memorials, Benfleet, Christ’s Hospital School, The Stock Exchange, and the Common Wealth Graves Commission cemetery at Helles.