Died during the Capture of Jerusalem 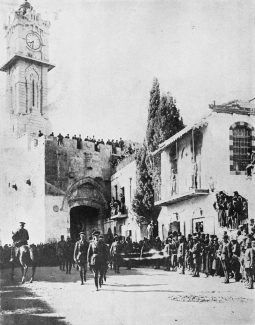 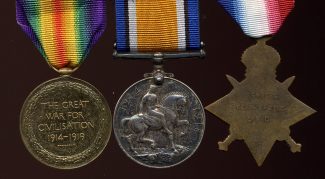 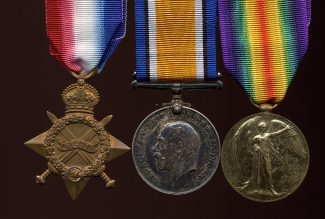 Rifleman Harold Edward Victor King (26) was born on 17th April 1895 in Hackney to Albert Charles and Alice King. For most of his life he lived with his uncle and aunt, Robert and Elizabeth King. In 1911 he was living with them at Claremont Villa (No. 187), Cumberland Avenue and was a clerk to a wholesale jeweller. The Army Registers of Soldiers’ Effects records indicate that he was not *married, as his War Gratuity of £15 10 shillings (£15.50 or about £800 in 2015 values) was paid to his mother Alice in 1919.

A check of the 1,775 “King” surnames who died during the First World War shows only one candidate to link with our name. When he enlisted he joined the 2nd/13th Battalion of the County of London Regiment (some records show he joined the 1st/13th, but this is inconsistent with his history). This was part of the Army Service Corps (ASC) and it is highly likely that he was part of one of the ASC companies 517, 518, 519 or 520 which provided some transport for the 60th (2/2nd London) Division. This in turn was affiliated to the King’s Royal Rifle Corps.

He entered France on the 14th January 1915, one of the earliest troops from his Division to do so. The 60th (2/2nd London) Division embarked to go to Egypt on 12th June 1917 and they arrived there on the 4th July.

They then took part in the Capture of Jerusalem which took place on the 8th and 9th December 1917. It is almost certain that it was in this battle in which Harold Edward Victor King was killed in action on 8th December 1917 and buried in Jerusalem. He was 22 years old.

For a long time nothing could be found out about this name as it was interpreted from the War Memorial as being H.E.Y King. there were no other capital “V” or “Y” to compare against. However the 1911 Census records clearly show a Harold E V King living in Benfleet. This is almost certainly the name on the War memorial.

In March 2015 Peter Weedon who is the custodian of the medals of H.E.V. King contacted us and gave us permission to display pictures of the medals.

* Checking the on-line records available by March 2015 showed that the  Army Registers of Soldiers’ Effects and WWI Service Medal and Award Rolls were now available. They confirmed that he joined the 2nd/13th, his service numbers, the fact he died in Palestine and indicated he was not married.