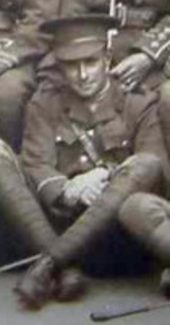 Lieutenant Harold Francis Box (37) (see also) was the son of the late Rev. Charles Francis Box, former rector of South Benfleet (who died early in 1914) and Emily Box. Harold was himself intending to take Holy Orders. He was the youngest of their six children.

He was born on the 28th February 1895 in Grays where his father was the vicar.  He was educated at Keble College, Oxford which he joined in Michaelmas Term 1915 (about the beginning of October). After passing through the O.T.C. he commenced service on 17th February 1915 with the 5th Battalion (Territorial) of the Essex Regiment and obtained a commission as 2nd Lieutenant on 28th March 1915. On the 24th November 1915 he became a temporary Lieutenant.

He was attached to the Royal Engineers in 1918 and was in charge of a signalling company on the Western Front.

He was killed instantly by a shell on 29th October 1918 while in a temporary bivouac in a front line trench near Valenciennes. He was buried in a little cemetery by the side of a brother officer who had been with him. He was described as:

His bright and cheerful manners, with his generous and kindly disposition, made him a great favourite with all his men.

He was 23 years old and the last Benfleet name  on the War memorial to die, 14 days before the Armistice.

His name is also on the 1914-1918 War Memorial at St Alban the Martyr in Westcliff-on-Sea and on the War Memorial of Keble College, Oxford. He also appears on the Brighton War Memorial.