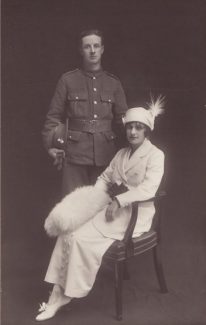 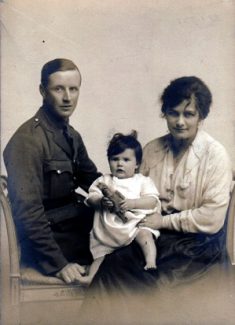 Second Lieutenant Ralf Hubert Robinson MM (22) was born on the 28th June 1885 in Stratford to Matthew and Celia Robinson. In 1911 his occupation is shown as a stock broker’s clerk and he lived at Inglenook, New Wanstead, Wanstead, Essex. He married Daisy Gertrude Marion Bailey in 1st Qtr 1915 in Wansted at St. Mary the Virgin with Christ Church. They then moved to Benfleet living at “Rowlands” (No. 37), Fernlea Road. He had a daughter, Sybil E Robinson, born in the 2nd Qtr 1916 and son, Ralf Hubert Reginald Robinson, born in the 4th Qtr 1917.

Pre-war he had played cricket. According to David Lemmon’s book “The Book of Essex Cricketers” he played for Wansted and was considered one of the best amateur wicket keepers in the country. He played with the Essex Team in 1912, where he was the wicket keeper in four matches. He made four stumpings and caught nine balls. In addition he batted in seven Innings being not out in two of them. He scored twenty five runs with his best result in his last match being eleven not out. According to Wisden after his death his widow asked if she could have his county cap for her son, which they agreed to.

He joined the 10th (Stockbrokers’) Battalion of the Royal Fusiliers and was sent to France on 31st July 1915. He was promoted to sergeant at some time as well as being awarded the Military Medal (MM), which was announced in The London Gazette on 19th February 1917. This medal was awarded for gallantry and devotion to duty when under fire in battle on land.

He joined the 2nd Battalion of the Rifle Brigade where he was commissioned as a 2nd Lieutenant on the 25th April 1917.

He died of wounds at Westhoek Ridge, Ypres during the Battle of Passchendaele on 23rd August 1917 aged 32.