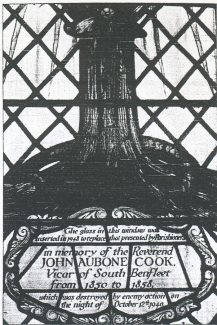 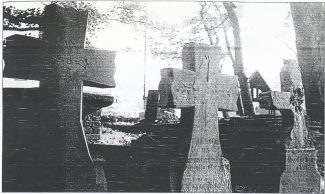 was 1854 when the railway line was built past South Benfleet to Southend, raising the rails on an embankment across the marshes, bridging Church Creek and on along Hadleigh Ray. The station was sited a little further east than it is now, at the crossing to Canvey.

At that time the pubs and cottages in the small village of Benfleet were crowded with lodgers. The workers who sank the supports into the mud were tough young men.

Skeletons and charred timbers of Viking ships were found preserved in the deep remnants from the battle King Alfred’s men fought and won there in AD 893.

Given the events at the time, it is perhaps not surprising that none of the items survived, for it was also the year that cholera visited England for the last time. Ten thousand still died of the epidemic in London before its source was identified. It did not spare South Benfleet.

“The pestilence fell like a thunderbolt upon the parish of Benfleet…” is how the Rev WE Heygate described the arrival of the cholera, in his account of the life of Benfleet’s vicar at that time.

One good old woman who had been nursing the sick, died at her task. Her husband and the niece who lived with them quickly followed. The man who took on the burden of nursing was the vicar, the Rev John Aubone Cook, “visiting the sick and dying from week’s end to week’s end. For seven whole days and nights he never went to his bed. For nearly three weeks he had not one whole night’s rest.”

He was doctor and counsellor in one, neglecting to eat as he rushed from house to house, sometimes spending as much as 16 hours without food: “administering the medicines, rubbing the cold limbs of those in collapse and praying by them when they were conscious…”

A physician of body and soul, not only did he tend to his own parishioners, but also the labourers who swelled their ranks. “There was no office so loathsome, but he himself executed it,” Heygate wrote later.

“With his own hands he held, carried, removed, cleansed, brought again the vessels required in such disease. The effluvia in a room occupied by several of these coarse men, labouring under such anauseous sickness as cholera, must have been overpowering. He lived in it…”

The Rev Cook would not have asked his neighbours for help, nor would he have them exposed to the infection. He himself buried those he had nursed – “40 during one month, four in one day alone, on the day they went to their deaths,” according to Heygate.

In Benfleet’s Register of Burials of that time, the horror stares at you from the pages. In a period from the 23rd of September, 1854 to the 16th of October alone, there were 38 fatalities. Only six days register no burials in that period – some days indicate three, one even four. Ages range from two months to 79 years, but strikingly obvious are the vast number of young men in their 20s and 30s.

Always, the officiating priest was John Aubone Cook. His sad recordings of each day’s undertakings show a remarkable consistency. His confident, almost flamboyant signatures never change. There is no sign of intimidation, no indication of fatigue, no apparent doubt. He simply did what had to be done to the best of his ability.

One story of the time so resembles that of the Good Samaritan, it well illustrates the selfless activities of John Aubone Cook.

A traveller was taken ill with the cholera and found lying by the roadside. People passed by, ignoring him.

Just as in the parables, every door was closed to him. Then a dissenter who was also a parishioner assisted and walked the sick man some distance from the village up to Vicarage Hill. The local man knew there was only one house where the sick would be taken in: that was the vicarage.

“Shrieking with agony,” the man was carried upstairs and put to bed. There Cook nursed him until he recovered. Cook himself spent seven days and nights without sleeping in his bed.

Cook had replaced Henry Robert Lloyd as vicar in 1850, coming from 12 years’ service as curate of St Margaret’s near the Houses of Parliament. There, in London in 1849, he had lived through one such epidemic already, visiting the sick and burying 50 people in one week. Fourteen thousand died during that outbreak.

John Aubone Cook was born 29 December, 1811 at Pilgrim’s Hatch near Brentwood in Essex, the son of a colonel of a cavalry regiment, the 28th Light Dragoons. Very early in his life the family moved to France, to a village nine miles from Havre by the side of the Seine. There, as he grew up, he would join his father on shooting expeditions, which in some ways prepared him for his later, peripatetic ministry.

It is not surprising to learn that he spoke perfect French: his first school was at Havre de Grace, followed by the French College at Honfleur, before his schooling continued in Woolwich in England.

When his father died in 1829, his brother joined the Army. John Aubone went to seek his fortune in India, but soon returned. On the return journey a storm almost wrecked and dismasted the ship. Perhaps it was then that his future was decided.

Cook entered Corpus Christi College in Cambridge in 1834. He had much to catch up on, but at Christmas 1838 he was ordained by the Bishop of London.

Not much is recorded about the man himself, but an illness in 1840 left him with a weakness in his voice which made delivery irregular, at times indistinct.

Cook’s friend and biographer describes Benfleet enthusiastically in Victorian terms, but there is a sting in the tail. “It lies beautifully varied with hill and dale and commands the sweetest views of the Thames, Kent, Essex, and on the east, of the sea. On the south however lies Canvey Island, and on the west a tract of marsh, very picturesque with light and shade, especially at sunset and in harvest, but equally unhealthy…”

The new vicarage “some distance from the village up a hill” – known today as the Old Vicarage – was unfinished when he arrived. Just as Baring Gould commented on the lack of social discourse in East Mersea, there was no-one with whom to continue social contact – no “society of educated men distinguished in the House of Commons and at the Bar,” like the one Cook had associated with in his previous position at St Margaret’s, Westminster.

One parishioner is recorded as saying: “If ever there was a man who cared for the souls of his people, it was he…”

When times returned to normal following the cholera visitation, grateful survivors presented Cook with “a beautiful set of vessels for administering the Holy Communion to the sick.”

In 1852 he had been made Rural Dean of Canewdon, another job without remuneration, involving only expense and long walks.

In December 1857 he also became incumbent of Canvey. But the stipend of £50 was too small to procure an assistant. For six months Cook served Benfleet and the island alone.

The Rev WE Heygate is adamant: “This poor benefice, which in good years yielded only £200 clear of outgoings was all he ever received in the church until he accepted the incumbency of Canvey Island, for its sake, not his own, thus adding to his labours and not his income, for he paid his assistant curate all that he received, and brought himself to his grave.,,

Heygate describe, Canvey Island as a “deposit of the Thames, existing in some form as early as the 2nd century of the Christian era… It was enlarged over the years… The population is small, but scattered. There is a chapel upon it…”

Cook continued to assist widows and beggars to the detriment of his own health. Unlike some clergy, people were encouraged to send for him at all hours of the day or night. He ate little. Even when gifts like game arrived, he was prone to give them away. As his own health faltered he suffered frequent attacks of neuralgia.

The hot summer of 1859 was followed by an unusual degree of sickness. In a letter to a friend, Cook wrote: “The sickness is fearful, general, almost universal. I am obliged to be both doctor and parson. I have never been so hard-worked since the cholera was here. People are seized with diarrhoea, pains in the limbs, sickness and fever, with a black tongue.”

Saturday, September 10, was his last day of parochial visiting. He’d left home at mid-dayand went from house to house without food. Darkness fell as he was still on the island. He lost his way and did not arrive home until ten that night. He felt ill, but Sunday lay ahead, which meant a full service at Benfleet in the morning, at Canvey in the afternoon and Benfleet again in the evening. With feverish pain in his head almost unbearable, he forced himself through the day’s work, then took to his bed. He was very ill for several days.

Many recovered from such a fever and the attending medical man expected him to improve. Maybe he was too weak. The fever seems to have affected the brain, leaving him delirious.

He died on the Feast of St Michael and All Saints, the very day on which five years earlier he had buried four victims of the cholera. His aged mother and eldest sister were with him at the end.

On Sunday October 2, the Rev Heygate from Southend spoke at his graveside as parishioners lowered his oak coffin. Heygate later wrote: “There were no dry eyes. I never saw so many weep, nor so worthily.”

John Aubone Cook rests from his labours close to St Mary’s beautiful south porch, flanked on either side by his mother and his sister.

Inside the church, at the side of the altar, a brass wall plaque reminds us of his sacrifice. But the large east window above the altar, which had been dedicated to his memory and showed the Good Samaritan, has since been replaced. It fell victim to a more recent, man-made calamity: “The glass in this window was inserted in 1948 to replace that presented by parishioners in memory of the Rev John Aubone Cook, Vicar of South Benfleet from 1850 to 1858, which was destroyed by enemy action on the night of 12 October 1940.”‘