You are here: HomenextBrowse ArticlesnextTopicsnextUnnoticed changing nature of local surroundings

Pioneer settlers in Canvey Island in the early 1940s 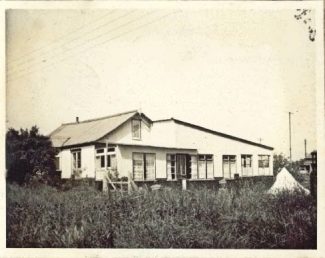 Back in the 1920-30s when Canvey was first spotted by entrepreneurs there was too much land for one person to develop. The developers/builders of the day decided to divide the land into smaller ‘plots’ that could either be developed or sold to potential pioneer settlers.

My grandparents, Bill and Florence, were some of those pioneer settlers in the early 1940s,  they were latecomers but having farming experience and some business acumen they saw potential in the land. They contacted a local Estate Agent, were put in touch with Mr Hester, one of Canvey’s original and probably most famous developers and bought a series of consecutively numbered ‘plots’ these were part of the Leigh Beck farm estate and originally designated for Hester’s planned Southview estate. Over time Grandfather built a large bungalow surrounded by a large smallholding, as time passed the bungalow morphed into a Guest house, with a very large garden plot.

My Grandparents’ guesthouse stood, until early 1970, on a plot spanning Station Road and Marine Avenue.  It has since been redeveloped.  Below is a potted history of the area from late 1950 to 2020.

The top photo is my Grandparents’  house, a Guest house named “Dalwhinnie” circa late 1950 mid-1960, it was a small holding comprising approx ⅓ acre laid out to vegetable plots and lawn. The majority of non-productive land was to the east and laid as a large cottage garden with islands of lawn and borders spotted with various fruit trees and flowering shrubs that fronted onto Station Road. The remaining land to the south and west was laid with pristine lawn comprising 130ft x 240ft and my father’s large garage. To the north the land comprised a separate letting chalet, a separate utility and two work-sheds, plus the northwest frontage consisted a small lawned area of 30ft x 20ft. The rear of the property backed onto Marine Ave. However, when my father bought a car and garaged it on this side it became more convenient to use the rear access, then a grass covered road due to the compacted nature of the ground.

All roads were unmade and remained so until early 1960 when the utilities commenced work installing drains and street lighting, soon after councillor Picket arranged a program of works to install concrete roads which ended years of swaying grass and deep rutted, thigh-high muddy passageways. This was the end of an era for Canvey we were being dragged from the dark ages, collecting water in garden bowsers, lighting from oil and candles, heating from wood burners into the dawn of the 20th Century. Some hanker for the “good old days”, good riddance I say. Just to spend time in a hot bath and not have to worry about wet wood for the fire and the inside loo was all worth it. If you were not there you can have no comprehension!