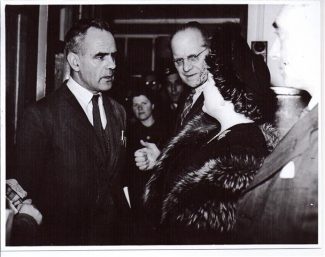 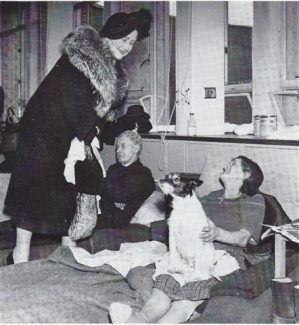 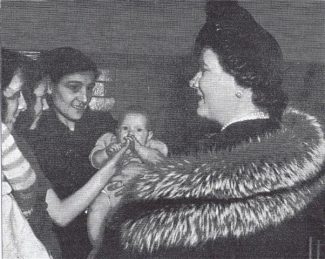 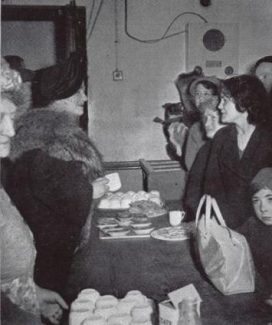 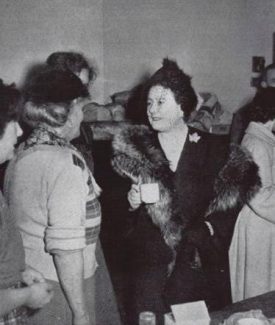 Following the terrible events of the night of 31st January 1953, when large areas of the south east were flooded and a devastated Canvey Island had been evacuated, Queen Elizabeth the Queen Mother and Princess Margaret visited Essex to comfort some of the victims. On 3rd February 1953, from a vantage point on a hill just above Benfleet, they saw for themselves the extent of the devastation before visiting the evacuees.

Benfleet Primary School, the new King John School (due to have been officially opened on 2nd February) and Benfleet Methodist Church were all used as evacuation centres and it was here that the Royal visitors heard of the suffering endured by Canvey people.

“The Queen Mother wanted to hear everyone’s story and both she and Princess Margaret proved to be sympathetic listeners giving a word of comfort or encouragement where needed, as they passed among the saddened figures.”

“Protocol was never a priority that day.  Refugees, drier and warmer now, remained seated at wooden tables eating their meal, while others lay fatigued on mattresses, their faces still bearing the signs of helpless disbelief.  It was strangely reminiscent of the blitz.”

“With little formality the Queen Mother and the young Princess wound up their visit by taking a cup of tea with the volunteer workers at Benfleet.
As conversation flowed freely across the cups of steaming brew, there was no obvious awareness from any quarter of the lack of saucers on this occasion.  So much more importance was placed in the sincerity and the well wishes that came from the Royal party, and clearly there were many that day whose spirits were lifted by their visit, if only briefly.”

Quotations taken from “1953 Remembered – The Story of the Canvey Floods”