The Thames Barges and Tolls on Bricks

Why brickmaking occurred in South Benfleet 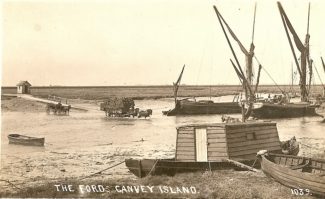 The Thames Barge and Barge Owners

The use of the Thames Sailing Barge for the transportation of raw materials and finished bricks was key to the development of riverside and coastal brickfields. Many barges operated on the rivers and creeks of Essex during the nineteenth century. They were still being used to supply building materials at South Benfleet well into the 1930’s. This flat-bottomed craft was relatively cheap to operate and could be taken up narrow creeks and restricted waterways.

The crew of a nineteenth century working barge consisted of just three people, the captain, mate and a boy. The Barge was designed with a large hold and its flat-bottomed construction allowed it to sit upright on the bed of a river or creek when the tide was out. Depending on its size a barge could hold between 30 to 50 thousand bricks. Brick producers as well as Independent traders operated barges from ports on the Essex coast.

Barges regularly changed owners over their long life. South Benfleet continued to have a few barge owners throughout most of the nineteenth century, it was not uncommon to find that barge owners also had other local business interests. The Howard family owned barges that were registered at Great Wakering and South Benfleet as early as 1848, in each location brick manufacturing became a local industry. The South Benfleet branch of the Howard family also owned the quay, the Hoy and Helmet public house and continued to run a dairy farmer for the greater part of the twentieth century.

By 1879 South Benfleet had its first registered brickworks and there were a number of barge owners in residence. The Wood family operated barges and were also landowners and farmers of substance. Jonathan Wood was the tenant of Sweet Briars farm, the site of the largest brickfield in South Benfleet. Jonathan and his brother Edward are also listed as “Wood E. & F., boat & barge owners”. By 1882 they are listed as “corn & coal merchants, forage factors & barge owners; & at Greenwich”. It is probable that the Howard and Wood family derived the greatest financial gain from the brick trade in South Benfleet through their various business interests.

The Salvation Army Farm Colony at Hadleigh, Essex had its own extensive brickfields and a number of barges. In 1897 one craft was registered as the “William Booth” after the founder of the Salvation Army. Interestingly he is recorded as a resident of South Benfleet living at “Hadleigh House” a property located just inside the parish boundary; the farm itself is in the adjacent parish of Hadleigh.

In 1876 the “Southend Local Board” or local authority introduced tolls to derive income from the movement of barge traffic. A sheet of “Pier Dues” was produced on the “25th March 1876”, it was “revised 23 July 1878”. The date of change was just added by hand and the increase of landing or embarkation rates was written on the document and the old rates struck out.

The increase in fees clearly targeted brick manufacturers, only barges carrying raw materials and finished bricks attracted increased charges, with the exception sand, which was available locally and needed for construction work. The charges were increased from 9d to 1/- per 1000 bricks and from 3d to 4d per load of chalk. Most significantly the cost of a “Culm or Cinder” was raised from 3d to 1/- per “Chauld”, an increase of 300%. This particular material was crucial to the manufacture of Stock bricks as it provided the 25% combustible additive required to self-ignite the bricks during firing. Clearly the increases were aimed at local Stock brick producers and very likely one manufacturer in particular.

There is no evidence of charges being levied on barge traffic by the South Benfleet Parish Council, but use of the local wharves would have attracted charges; the Wood and Howard families owned these facilities. It is likely that mooring in the creek attracted no charge and judging by old photographs this would appear to be where many of the barges moored.

By Peter Gillard as edited by Christine Coley