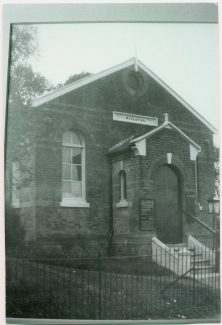 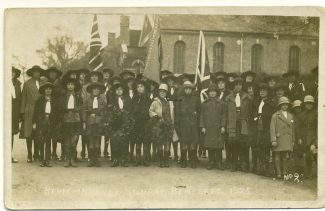 The first Methodist Church in South Benfleet opened in 1877.  It boasted the title WESLEYAN over the front door and stood at the junction of East Street (now Essex Way) and School Lane.

However, we know that a Methodist Society had been in South Benfleet at least twenty-one years earlier. A Circuit Plan dated 1856 shows a Society meeting somewhere but its actual site is lost in the mists of time.  Presumably, services were held in a cottage or perhaps at what we would call today, a House Church.  There were also open-air services at ‘the brickfield’.

A ‘lobster pot’ stove burning solid fuel would have heated it. Evidence of this is that a chimney is visible in one of the extant photographs.

We know that the seating was crude – a simple bench with minimal support for the back. These benches slotted into recesses in the wall and occasionally they came loose leaving the seated worshippers to tumble inelegantly into a heap on the floor!

The music for worship was provided by a harmonium which was transported to the London Road (now High Road) for the stone laying and eventually, on completion, to the present building in 1931.

Part two of the history – The need for the new chapel.