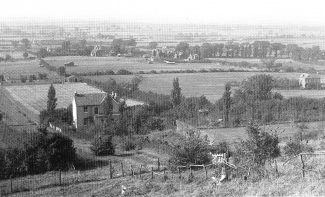 zoom
This photo was taken from the area of St Peter's Church looking down towards Chesterfield Avenue. The area beyond the house, which still stands today, is now known as Manor Trading Estate. Date unknown.

Formerly known as New Thundersley County Primary School and situated in Rushbottom Lane, just past St George’s Church. Rushbottom Lane runs from the A13 at Gt Tarpots right through to Pound Lane in Pitsea.  The road was made up as far as the church, there was then a concrete footpath as far as the school and after that the road was completely unmade with a ditch that was kept clear by council workmen or farmworkers.

My first recollection of the school was in 1941. My older brother and I had been evacuated from London to Devon. We then travelled north to Lancashire to join mum and younger brother. After my father had left for the Middle East and mum had saved enough money for the train fare south, we returned briefly to London.  To escape the bombing we came to Essex, staying with a widowed relative by marriage, in the very last bungalow in Rushbottom Lane, just past its junction with Woodside Avenue. We stayed for a few months that summer and I attended the school for a short time.  In the autumn term the weather made it too difficult for us to walk safely through the mud in the lane.  My older brother got very ill and we returned to London for 2 years, sleeping in the tube shelter until there was a disaster there when about 170 people died.

My mother then decided to return to Essex managing to put down a small deposit on a bungalow in Church Road and I returned to the school in May or June 1943.

The school was built of dark clapboarding and was on stilts. It comprised 3 main classrooms with a small cloakroom at each end. Across the corridor, which ran alongside the classrooms, was another small cloakroom with a wash hand basin and 2 other smallish rooms – the headteacher’s office and staff/stockroom. Lavatories for the children were across the playground in a brick built building. Attached to the front of the school was the coke store. This fed the large boiler in the middle classroom and kept the whole school warm in the winter. The caretaker topped up the boiler when he was on duty but otherwise the teacher had the job. Well, it was near her desk!

This middle classroom was for 3rd and 4th year juniors. The class nearest the playground was for infants – all of them between 5 and 7 years and were taught and mothered by Mrs Gould, a kindly older lady.

The class at the road  end of the school was for 1st and 2nd year juniors, taught by the headteacher, and which also held the piano.There was no school hall.

I went straight into the middle classroom and was taught by Miss Adkins.

There were many rows of old fashioned double desks with an attached bench seat and lift up desk lids with an inkwell and grooves for pens/pencils at the back – no biros then.  Just “dip in” pens with sharp nibs which naughty boys occasionally pinged up to the rafters with a ruler. Given the opportunity these lads would dip girls’ plaits in the inkwell!

When you first joined the class you sat nearest the windows – and remained there if you were a duffer. As you got older and progressed you moved towards the desks on the corridor side of the room.  Work was written up on blackboards ranged along the front wall with often a free standing board as well to cater for the varying capabilities. We often had mental arithmetic or a spelling bee before registration which sharpened up our knowledge of tables, feet and inches, £ s d and pints and gallons. After registration we had stories from the Bible, both old and new testaments and then came arithmetic up to playtime and every morning.

I used to like addition, long division, multiplication, LCM, HCM, shopping bills (all useful stuff) but I couldn’t get the hang of ‘problem sums’.  English was for after play or maybe History or Geography. During the afternoon we often changed classes with Miss Wilden’s class and had hymn practice or social singing of traditional songs like ‘Hearts of Oak Are Our Ships’ etc The girls also had needlework or knitting lessons with Miss Wilden, whilst the boys had handwork with Miss Adkins or went outside for football, cricket or rounders.  I recall making a wearable jumper and a skirt in floral cotton by the time I was 11 but I enjoyed these lessons.

There was an old fashioned radio when we listened to nature programmes and we sometimes walked along the lane to gather sprays of  blackberries or acorns to study and draw.

Art work, like all work, was done at your desk. There was little room to move about with such large numbers in the classes, especially in 1944 when the school had to cater for up to 50 pupils in class as families fled London and the V1 and V2 rockets. Even one of the small rooms, probably the stock room, was taken over and when the door opened it appeared to be bursting at the seams with miniature tables and chairs, it was rather like the woman who lived in a shoe.

At the end of the afternoon the teacher read a story and judging by the rapt silence this was enjoyed by all. From Spring when the weather improved the children were encouraged to do gardening in the small “allotments” where the new Primary School now stands. Behind the allotments stood the large concrete air raid shelter.

If you really couldn’t get home for lunch and mum could afford the few pence, you had a school dinner, brought into school in metal containers. Jokes abounded about lumpy mashed potatoes or custard but I don’t think the meals were too bad from what I heard.

P.E. and games or Country Dancing were always held outdoors if the weather permitted and we would sometimes sit on the lawn under the big oak tree for a lesson.

Occasionally the school held a Jumble Sale to raise funds and Miss Wilden persuaded my mum to buy a wide brimmed hat “for shading her face when working in the garden”. Mum often wore it for that purpose too.

Towards the end of the Summer Term we had Sports Day on the big adjoining field. It seemed the sun always shone and the day was greatly enjoyed, more so if you won a big coloured ball or a skipping rope.

I remember the Spring and Summer flowers growing in the garden alongside the school and the sweet smell wafting in through the open windows on sunny days.

Crowded though the school was and discipline strict the school usually had one or two children pass the 11+ each year. I remember my time at “the little school” as being a happy one. In later years all 3 of my children attended this school.

Eventually, the old wooden building had had its day. It had been extended with a hall and demountables but a new brick built Infants was built next door and was later enlarged to accommodate the Juniors and it became a Primary School.

I hope its pupils are as happy as I had been in “the little school” of my childhood.