The Maternity Home on the Downs 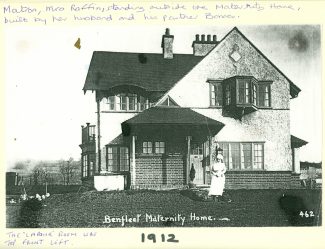 This picture shows Ray View in 1912 when it was a maternity home.  The matron, standing outside the property, was Mrs Raffin. The property was built by Mrs Raffin’s husband and his partner, Bonser.  The ‘labour’ room was behind the top left-hand window.

In later years Ray View was occupied by the Tyler family between 1943 and 1959. Rex Tyler spent his boyhood there and his father was the Downs warden.

Later, the Crimmins family lived at Ray View, with Bill Crimmins being the warden.

Further down along the side of the railway, heading east, stood another dwelling, a small bungalow called Kersey Farm.  Sid Cripps was the occupier and he kept pigs at the rear of the property.  Sid, a small man, was well known at the Hoy & Helmet Public House. He entered the pub with his cap straight, but so rumour had it, he always left with it turned to the side.

Kersey Farm stood in what was known as the ‘horse field’.  Some brickwork still remains.  An earth heap, nearly opposite, covers an air raid shelter.

At the time of World War II anti aircraft guns were positioned in the next field, to the east.   Rex Tyler said there was a military type control centre up above, towards St Mary’s Road, in the embankment.

During the war, Sid Cripps ‘arrested’ a german soldier, whom he saw come down on a parachute onto the Downs. The soldier served out the rest of the war at Kersey Farm.  When the war ended, Sid and the soldier remained friends.

Kersey Farm was demolished in the 1950s due to flooding.