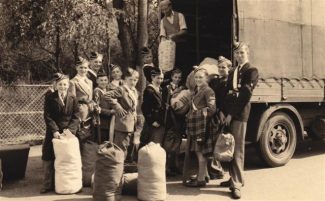 This photo, taken in the mid. 1950s, and supplied by John James, shows a group of boys from the 6th Southend Boys Brigade preparing to go to summer camp.

The group used to meet in the Congregational Church near the corner of Kenneth Road and London Road and although John was a member he does not appear in this photo. He has though identified 3 of the boys as Frank James, his cousin, also Ken Collins whose family owned the newsagents opposite Dark Lane School and Geoff Lloyd of Lloyd Carpets of Benfleet. If anyone can identify any of the other boys please do let us know and perhaps add where the camp was being held.