When Essex Carriers Were Recruited to Assist. 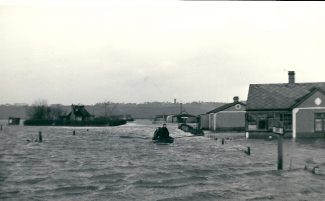 When the East Coast Great Flood happened in 1953 I was manager of Essex Carriers and sick in bed with ‘flu in my flat in Leigh when Dick Brittain, founder and owner of the firm phoned to say Canvey was under siege by the sea and we had been recruited. I was told to get to the depot in Rushbottom Lane tout suite. Dick Brittain was chairman of Benfleet council at the time and became more or less local Supremo. Fortified by tea and aspirin, I went to the yard and had the side boards taken off our flat-bed trucks and went to Canvey Bridge which had become the marshalling point.

We had five flatbeds at the time, and I took off with one truck to Westcliff where the yacht clubs had their dinghies parked up on the front.  We had loaded some nine or ten eight and ten footers when the yacht club secretary arrived in some dudgeon at my temerity, but was soon persuaded of his civic duty and parted with oars and rowlocks to suit. We trucked them down to the causeway and bridge that linked Canvey Island, which was under six feet of water in places.

The owners were decidedly not pleased even when we told them how kind it was of them to volunteer their craft in such a good cause. When it was all over the dinghies were put back on the seafront and they had to sort it all out themselves. Amazingly, we were only two oars and a rowlock short.

I spent the next twenty four hours almost permanently wet and cold, and found it is a great cure for a stinking cold, but not to be recommended

Back at the Canvey Bridge the fire service set to with the dinghies and quite soon a number of green Bedford trucks arrived, driven and crewed by formidable middle-aged ladies in green jacket and skirt outfits of vaguely military cut.

The second day saw the arrival of the Queen’s Messengers, a flying convoy of WVS members who provided quick comfort and relief for such disasters, kitted out in their uniforms, and in a convoy of green Bedfords kitted out all ready for such a disaster. The Messengers had found a nearby area to set up, and had deployed a set of Soyer cookers. Soyer was the celebrity chef at, I believe, the Ritz, and he had invented the simple but efficient cooker to feed the troops in the Crimean War. They resembled a 40 gallon oil drum and had a grate below that could use almost any fuel and had a cauldron in the top. Rapidly the meat and veg was prepared, fires were lighted with kindling that somehow appeared and soon rib-sticking hearty stew was ready for the first of the rescued and the rescue workers.

The WVS lady rather resembled in build and appearance an unfunny Margaret Rutherford. “Now look here, my good man,” was her opening……

The cookers used coal and I set off with a lady in a truck on a round of local coal merchants, who were not enthused and wanted cash up front. The WVS lady rather resembled in build and appearance an unfunny Margaret Rutherford. “Now look here, my good man,” was her opening, and we returned with a full load and while the firing-up started I was off with another lady for a round of butchers and greengrocers. She was small but even fiercer than the first one and was not going to be fobbed off with left-over stock or wilted vegetables. But she left the shopkeepers feeling they had done a work of great service for the Old Country.

Their leader, the most formidable of all the women quickly found I was the handiest transport man and off we went into Leigh to the main coal merchant and she commandeered about half a ton of fuel and then another half ton at another merchant.

Then it was off to the largest butcher’s shop where she somehow got the shopkeeper away from his Sunday lunch and we loaded (suitably wrapped) a goodly quantity of his wares.

Next another butcher, two greengrocers, two bakers and we got back to the bridge well provisioned. Somehow, no mention was made of any any form of payment, although I would have found it difficult to resist the lady, who rather resembled a force of nature. We delivered our haul and I went for another couple of hours rowing around and returned to a most welcome plate of stew, delicious beyond words. Made in what looked like an old oil barrel with a smokestack

All the coal merchants and shop keepers got paid – eventually. The Queen’s Messengers stayed nearly a week, and I learned the WVS is by no means all jam-making and flower arranging classes.

I handed off the truck to one of the drivers and for want of something to do recruited a firefighter and using my then moderate skill at messing about in boats set forth to get people out of their houses to dry land in the deeper parts. The dinghies went straight into service and I and a fireman voyaged about getting people off, in many cases, their roofs, because most dwellings on Canvey were bungalows.

This proved somewhat problematical in some cases. People wanted to take all sorts of things with them, one old lady refusing to leave without her treadle sewing machine. Being in a bungalow we could not put it on an upper floor, but she eventually agreed to leave when we hoisted it up on the kitchen table.  We promised to return for it. We lied.

Pets were another problem. Cats were adept at escaping their owner’s arms and for some reason liked hiding under the dinghy’s seats and scratching wildly at any hand near it.

One large dog leapt out and swam off in the direction of the breach in the sea wall and we had difficulty in stopping the owner from swimming to its rescue. It turned about in due course and we got thoroughly wet when in it was back in the boat and it had a good shake.

One small woman had a large Alsatian which took a dislike to me and spent most of the trip straining at its lead to get at my throat. I set a stroke at the rowing which would have done well at the Boat Race.

And so for three days I busied myself mostly living on sandwiches, stew and cocoa and sometimes soaked to the skin and I don’t remember how often I occupied my own bed. But I found that it was one sure way of making ‘flu disappear.

The Essex Carriers depot, having a sizeable warehouse usable, became the collection point for furniture donated from all over the country to replace that lost by the Canvey residents, and I had some part in seeing it was fairly distributed, I was much disappointed by the number of grifters who applied for what we were handling.

People from Southend and even Chelmsford, living miles from the sea tried it on, and even showered me with abuse verbal and written when refused. The same thing happened when we did the same with clothing, and bed linens. Some letters even got written to the local paper complaining that we were being unfair and arbitrary.

Then a scheme was hatched for the collection of sweets and chocolate, which were, of course quite stringently rationed. Memory possibly fails but it may have been as little as two ounces a week. Some of the letters accompanying, such as a single one-ounce Nestle bar from a small child were almost heartbreakingly touching.

Strangely, we ended up with a fairish amount in surplus undistributed which I recall ended up at the children’s ward at the hospital.

As a side issue I think it did Essex Carriers good on the PR front and I certainly had an experience that greatly heartened my opinion of my fellow citizens and saddened me with the number who ‘Tried it on’ at the expense of the good guys.

It is of no importance now, but when the account of the Flood was published one of the photographs showed my fireman and me landing our dinghy the caption says I am the one being rescued!