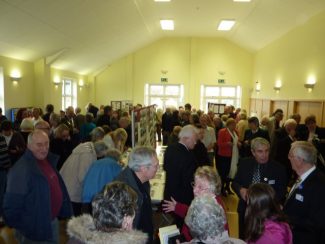 zoom
The crowds who visited the exhibition and launch
Dave Cowan 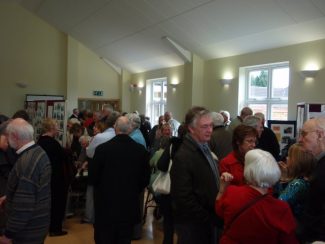 zoom
A view of the exhibition
Christine Coley 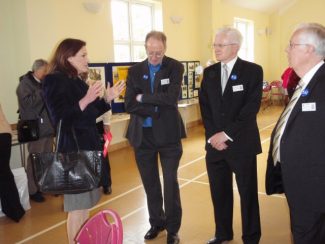 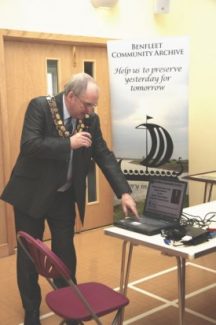 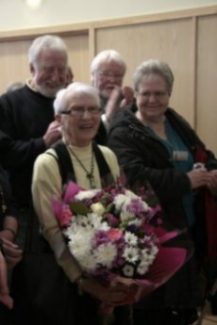 zoom
Local artist Iris Sugg receives a bouquet of flowers. Behind her on the top right is another local artist Cliff Messitter
Rachel Day

The Benfleet Community Archive (BCA) had an exhibition and formal launch on Saturday 5th March 2011 at the Benfleet Methodist Church Hall. People started to arrive from 10 am and were still there after it had closed at 1 pm. We estimate that several hundred people visited.

The Archive committee had arranged a number of displays of pictures of the local area including art and artists, shops, and schools, all of which proved extremely popular with visitors. In addition there was the computer area where a film and the Archive were displayed on screens and other computers were available for people to see what was on it.

At 11 am the official part of the ceremony started. Mark Thres, the BCA Chairman spoke about the work done in setting up the Archive and in particular Deborah Peers of the Essex Record Office, and Susan Hampson of Essex County Council Libraries work in obtaining a grant from the Heritage Lottery Fund for the South East Essex Community Archive Network (SEECAN) of which the BCA is a part. He also thanked one of his local art inspirations, Iris Sugg, and presented her with a bouquet of flowers.

The BCA Webmaster, Phil Coley, then explained what the archive was and what it meant for users. The lottery grant had paid for the website, a laptop with scanner, and training for the team. As a result he stated “it costs users nothing to look at the archive, nothing to make comments, and nothing to submit articles and get them published.”

Also present was Rebecca Harris MP who has a long time interest in local history, dating from the time when she was Marketing Director at Phillimore, who specialise in publishing local history books. She spoke about her total support for this new venture.

The Archive was officially launched by Castle Point Borough Council Mayor, Cllr. David Cross, who pressed a button on a keyboard to symbolically launch it. A video of the speech highlights is on this site.

The committee created the displays, but the support team on the day ran most of the event for us, allowing the committee to concentrate on meeting and talking to people. Our thanks to all the support team and in particular to our photographers and video crew: Rachel Day, Dave Cowan, Frank Gamble and Christine Coley.

Our thanks also to the other Archives for attending, especially the Canvey Island Archive who reported the event on the day of the launch.

The launch event would not have been possible without a donation from Countryside Estates.