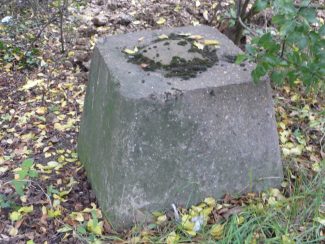 zoom
A base for one half of a road block?
Eileen Gamble 2011 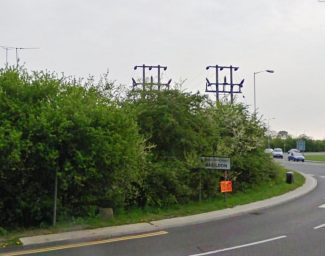 zoom
The base just visible between the post far left and the orange sign.
Photo before current road layout changes were commenced.

Could this be part of a road block?

We have been alerted by a Mr Hawkins from Benfleet, that there is one half of a Home Guard road block still in position close to Sadlers Farm roundabouts. Mr Hawkins was told about this by a local man some years ago.

The small, concrete block stands forgotten, just past Romsey Road on the western side, immediately before entering the roundabout.

The other half of the block, which would have had poles with ropes crossing the London Road, would have been close to Clare Road, thus forming a barrier and the men would have been able to stop approaching vehicles before entering South Benfleet.  It is likely that this block was lost/removed when the changes were made to the road layout some years ago.

We do not know the full facts surrounding this story and wonder if any readers of the site can add anything to this article.

If information on our local defences is of interest to you, an excellent, in depth study into our local defences during World War II was prepared by A.G.E.S.  Archaeology Geophysics Enthusiastic Searchers.   A fully illustrated booklet is also available to read at South Benfleet Library in the High Road. The booklet covers World War II defences throughout Castle Point and Basildon. It does not however, contain details of Home Guard defences.

By Eileen Gamble and Ronnie Pigram