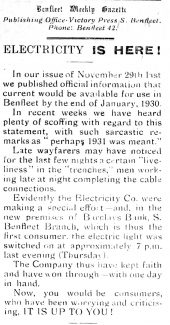 Electricity was late in coming to Benfleet. Before 1930 people might use accumulators that could be charged up at several local stores. Presumably these had their own small generators. However mains power did not arrive until Thursday 30th January 1930 when a light bulb was switched on at 7 pm in Barclays Bank.

There were many schemes to bring electricity to Benfleet including one by Southend Council. They had first applied for permission to supply electricity in 1890 and were granted it. By 1927 they applied to supply power to the surrounding districts and intended building a power plant on Canvey Island. However this scheme was not approved. However a scheme by the London Electric Supply Company was approved and electrified a great part of Essex with South Benfleet being among the first.