The Blacksmith shop in Benfleet Village 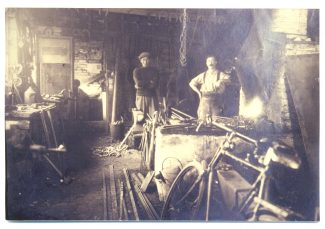 zoom
inside the forge
Michael Walsh 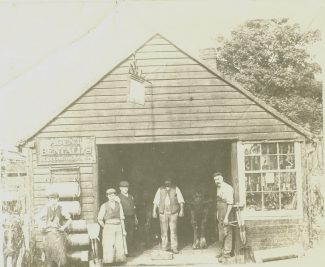 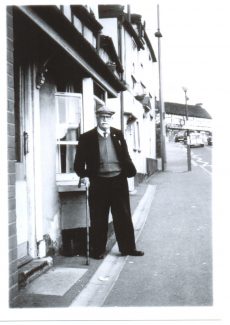 Michael Walsh’s grandfather was Henry ‘Harry’ Thurgood who owned the Blacksmith’s that stood slightly uphill from The Hoy and Helmet Public House in the High Street.    The picture shows the inside of the forge with Harry on the right and Fred Taylor on the left.   Michael says that Fred married one of Harry’s daughters, Lillian and they had three sons.

Harry Thurgood had four daughters (Winifred, Lillian, Dorothy (Michael’s mother) and Florence.   They all lived at 9 Essex Way, part of a terrace of cottages (numbered 8 to 11) on the right hand side going from the War Memorial.   All four girls went to the Benfleet National School in School Lane.   Dorothy married Conan Walter Walsh in St Mary’s Church in 1946 and Michael was born in 1947 followed by two brothers.

Michael says “We all carried on living at 9 Essex Way (now No 78 Essex Way after the bungalows were built on the fields opposite).  The Cottage was two up and two down with a scullery and an outside lavatory.  You had to be brave in those days to go outside to the loo on a cold, wet or snowy winter’s night with only an oil lamp for company.  We only had gas for lighting and cooking when I was very young.  The radio was run on glass batteries, rectangular in shape and they had to be recharged every two weeks at the hardware shop below Knightley’s newspaper shop in the High Street (this would have been Attwell’s).   Electricity was a luxury when it finally arrived!”

“By the mid 1950s the cottage was becoming rather overcrowded so my Grandfather (now retired) moved out to live with his eldest daughter, Winifred, in Stanford-le-Hope”

The photograph of the front of the Smithy is shown.   When it closed down it became two small shops – one run by Mr Palmer selling electrical goods and services and the other by a Mrs Sewell (I think this was her name) selling knitting wool.   I remember going there with my mother and Mrs Sewell would put the wool by for you if you couldn’t afford it all at once or were unsure how much you needed!   The building was demolished in the early sixties as part of the road widening scheme.   It is now the entrance to the Hoy and Helmet’s car park.

Michael Walsh also remembers that “the flower shop at the top of the High Street was owned by Lucy Marshall but it was run by a friend of my mother’s Daisy Shepherd who also lived in Essex Way.”

Finally the photograph is of Michael’s grandfather, ‘Harry’ Thurgood.  He and his wife are buried in St. Mary’s churchyard.

By Michael Walsh and John Downer