A building for the social life of the Parish

I found the first reference to the site which The Institute came to occupy,  in the Churchwarden,  Mr. Matson’s papers, where he made a pencil copy on foolscap of several Indentures, together with a precis of other legal documents. Mr. Matson was Churchwarden in the mid-twentieth century. Although it is difficult to be precise, The Institute would appear to have been built around 1895. A snippet of a letter from a Mr. Nicholson, recorded in the red ledger in the Matson Papers. states that ‘The Institute was built when Spencer was Vicar [1885-1895], on the site of the cottages which may once have been a chantry priests’ house.’

The first, dated 19th December 1850, I quote in full as it is too faint to reproduce:

‘Robert Laver and Wife, to George Wood. Appointment and release by way of Mortgage of Freehold premises at South Benfleet  and Covenant to surrender Copyhold premises there.

Robert Laver owes Executors of Mrs. Merrifield,  late of Rochford, Marston & Farmer, £300. Laver and his wife assign to Wood two Messuages or tenements adjoining together situate near the Church in South Benfleet, late ‘Bickneys’; and a tenement commonly called, ‘The Pyehouses’, sometime since in the occupation of  Messrs. Morton & Rawlings or their undertenants, afterwards of Thomas Gisbey, & Mrs. Cook, now of John Wood and Henry Brewster, their undertenants; also a piece of land [word unreadable] sixteen and a half square feet, formerly gardens and grounds of a Messuage in the occupation of John Cowper, from whom it was purchased by Simeon Daines, together with a cottage since built on the said piece of ground by the said Simeon Daines, and formerly in the occupation of  Edward Whatten or his undertenants, since of Edey, (widow) and now of James Byass & Widow Haylock.

Laver and his wife also undertake to surrender two cottages built on a piece of waste land of the Manor of South Benfleet & Jarvis Hall situate upon Hopes Green, now occupied Williams & wife – and Jarmany – also a  piece of the waste soil situate on Hopes Green, eight roods long by two and a half, and one rod, adjoining the cottages, to which Mary Laver is admitted tenant.

Two copyhold Messuages in East Street, late in the occupation of Richard Jones and John Dean, and now of Sarah Jones, widow, & John Horner, to which Mary Laver is admitted tenant.’

Also copied on the same foolscap was part of a Conveyance dated 22nd February 1879:

‘….. States that default was made by the Lavers not reimbursing the Principal. This land sells for £95 to James Wilson, two Messuages adjoining together near the Church at South Benfleet, called ‘Bickneys’ (formerly one tenement called ‘The Pyehouses’). Also the tenement built on the gardens/ground sixteen and a half foot square, all this premises now in the occupation of John J. Goldstone and James Pilgrim.’

On separate sheets Mr. Matson gives a timeline, and precis of events:

‘1st May 1892 – James Wilson to The Benfleet Institute Limited

James Wilson, formerly of Leigh, Innkeeper, but now of South Benfleet, of no occupation, sells for £60, four cottages standing at the corner of Benfleet Churchyard.’

x 1 16 and a half square feet of land and cottage (apparently two cottages at this date).’

Benfleet Institute Limited borrow £150 from the Victoria Mutual Assurance Society Limited at 4 and a half percent ….

Convey land next Benfleet Churchyard on which stood four cottages to The Benfleet Institute.

Company not to give notice to terminate for 3 years if conditions fulfilled.

Fittings included books in a library.

I found an interesting snippet in the ‘Reminiscences of a Former Benfleet Resident Over 80 years old’, (sadly, not named), which was reprinted in the 1976 Journal of  the Benfleet & District Historical Society. It was originally printed in the 1964 edition.

‘After Mr. Buckingham’s butcher’s shop disappeared, the Village Institute rose on the foundations’.

‘I recollect the opening of it. There was a grand concert or so it was billed. The price of admission was 1/-d, and I could not raise enough to gain admittance. But where theres a will theres a way, and the solution appeared in the shape of a sycamore tree up which I clambered. I got a clear view of the stage and the Artiste singing her song and doing a few steps at the same time. She wore short skirts, plenty of frills and furbelows and the song was ‘Daddy wouldn’t buy me a Bow-wow’.

Priestly, in his ‘History of Benfleet’ Book Two, Modern times, mentions the ‘Village Institute’, and states that, ‘for nearly 40 years it was the centre of the social life of the parish. The Vicar, the Rev. C.F. Box hired it for concerts, singsongs, lantern lectures and penny readings.’ ‘During the 1914-1918 War, the Institute was used as a soldiers’ club. When it began losing money, the shareholders presented their shares to the Vicar who, within a year enlisted the efforts of the parish and paid off the debt.’

The Institute, and Knightley’s shop, were demolished in 1932 when the High Road was widened to accommodate the increase in traffic. By that time a Church Hall had been established in School Lane, which became the hub of the community. 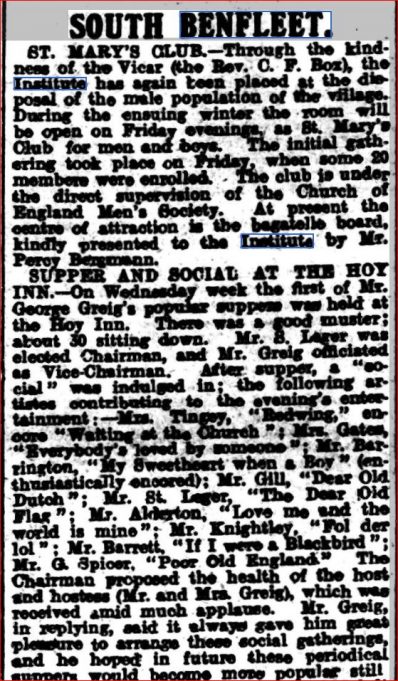