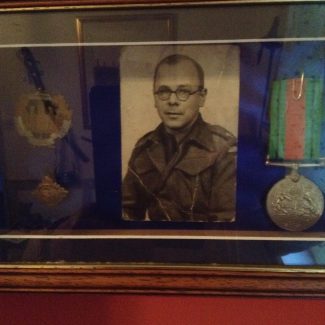 The Home Guard in Benfleet

My late Father, Frank Daley, was a 2nd Lt in the Home Guard in Benfleet.  I can remember him telling me that there was a road block just by St Mary’s Church as you came down the High Street and a large mine at the bottom of Vicarage Hill controlled from Barclays Bank. The Tower of St Mary’s was designated as the Keep and was to be defended to the “last man, bullet and bomb”.

During the war my family lived at “Nymphayes” Vicarage Hill.  My Father worked in London. I believe at one time he had something to do with Deadman’s Fort on Canvey Island. Dad was a crack shot and could shoot the flame out on a candle. An ability he still had when he came out to visit me when I was stationed in Berlin in 1969.

The Home Guard has been portrayed as a bit of a joke on television but if push had ever come to shove I’m certain that they would have put up a good fight and sold their lives dearly.