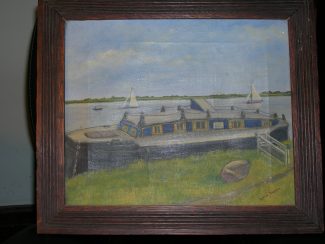 by Sally Bennett, writing from Canada…

I was born in Oxfordshire in 1944 and lived in South Benfleet from 1948 to 1955. Please forgive the lack of detail as these are only the memories of a child.

We first lived in a bungalow in Watlington Road where we put out a pail of salad refuse, potato peelings, etc. at the side of the road. The farmer down the street collected these to feed his pigs. We used to go to the Methodist Church for government distribution of milk powder and small bottles of concentrated orange juice.

Our dad, a soldier at the time, took the train to some army base in Woolwich every day, and in late 1949 or early 1950 we moved to be closer to the train station, to a houseboat on the creek.

We had to carry the drinking water a long way from the communal tap by the Canvey bridge, but we also had a cistern which collected rainwater for doing laundry. There was a washing line and a flower garden on the land adjacent to the boat.

There being no electricity, we used a Tilley lamp for lighting, and a primus stove for cooking. For an oven there was a metal box with legs about 15 inches long. The primus stove went underneath and in this our mother produced the most delicious cakes, pies and roasts. The tide came in twice a day and sometimes our soup or gravy would slosh from side to side with the movement of the boat.

We first lived on the “Blue Peter”. When it was destroyed in the 1953 flood, we lived temporarily on the “Windmill” until we bought the “Millie”, which was situated much closer to the Canvey bridge. As an 11 year old, I was able to carry back from the tap 2 two gallon containers of water. Both the “Blue Peter” and the “Millie” were converted barges about 70 feet long, I think. Each had a living room, a kitchen, two bedrooms and a toilet. For heat we had a little freestanding coal-burning fireplace; I remember it had two little doors with mica (?) windows.

There was plenty for a child to do: we picked flowers and mushrooms in the fields, and blackberries “up” the Downs. Once when it snowed, we went tobogganing up (or would that be “down”) the Downs. We sat on the fence and waved to the engine drivers of the trains, then wrote the engine numbers down in a little notebook. We played in the marshes and walked along the sea wall toward Hadleigh Castle. In the summer we swam in the creek every day, but (for hygienic reasons) only when the tide was on the way in. We had a dinghy and a little cabin cruiser, “Evelyn II”, for family outings and picnics down the creek.

Scant memories of my first year: we memorized tons of poems (“Someone came knocking at my wee, small door….”), played black castanets in the rhythm band, learned to print our letters. Each coat hook in the corridor was identified with an animal sticker.

Was it Mrs. Shaw in the next class? By then we were writing little stories, doing arithmetic, and spending interminable Friday afternoons knitting a pair of striped mittens. The only other student name I remember from that class is Allen Wrigglesworth.

The toilets seemed miles away down the playground. The gym equipment was stored in the air raid shelter. Across the street from the school was a little (white?) building which was the library. It was also used by my older sister’s class until the new secondary modern school was completed. Behind the school was the “Rec”, a playing field used for Field Day races.

Seven to eight-year-olds were in Miss Walford’s class, where we began each day by reciting the times tables from 2 times to 13 times while she did her record keeping at her desk. On Wednesdays we would bring 6d for a National Savings stamp which we would stick in a little book which was worth 10 shillings when full. The stamp had a picture of a red squirrel holding a nut. We sat in four rows of double desks according to our ranking on the monthly tests.

I don’t remember much about Mr. Seager’s class except being sent often to the office for talking too much. The caretaker would bring crates of little bottles of milk to the class just before morning playtime. Mr. Woods would come to the class once a week to drill us on mental arithmetic. He would also on occasion do music appreciation at the assembly. I particularly remember Peer Gynt  “In the Hall of the Mountain King”. From that class I was supposed to go to the new school in Basildon, but we moved and I ended up at Gravesend Grammar School for Girls.

To get to school from the creek we first walked along by the houseboats, then crossed the two sets of tracks (very scary for a little girl) to a footpath which lead up the Downs to the bus stop by the war memorial. Or, instead of crossing the tracks we could go down the road by the station and cross at the footbridge. We would wait on the bridge for a steam engine to pass underneath, spewing smoke all over us. On that street along and across from the station lived a woman who took in washing. Steam billowed out of her house, and sheets were always flapping on the line. Past the bus stop there was some kind of book shop. When I was quite little my mum would sometimes take me there to buy an Enid Blighton Mary Mouse book for a shilling. I learned to read from those little books– and I still have some of them. Later on I would go to that shop and buy pretty foreign stamps for my collection.

Somewhere around there was a hall where we went for Brownies. We had other activities in the village too: the school choir, and fêtes in the garden at the Vicarage. I can’ t remember where it was, but I went to dance class – ballet, tap and acrobatics. I think Veronica Green took lessons too. Does anyone else remember that?  I do remember coming home at night taking a creepy short cut through the churchyard.

Seven long ago, far away, happy childhood years in Benfleet.