You are here: HomenextBrowse ArticlesnextChurchesnextSt Marys ChurchnextIn the Choir at St. Mary The Virgin South Benfleet

In the Choir at St. Mary The Virgin South Benfleet

The joy of being a chorister 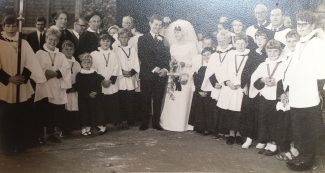 zoom
The choir at a wedding c.1966
Pamela-Jeanetta Bird Gaines 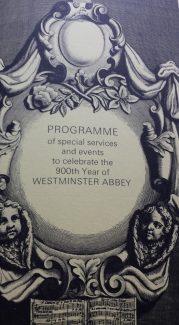 zoom
The front of the commemorative booklet
Pamela-Jeanetta Bird Gaines 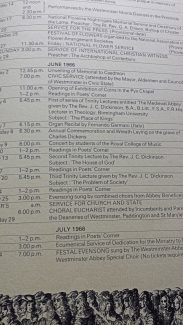 zoom
A page of the commemorative booklet
Pamela-Jeanetta Bird Gaines

My family moved to the Newsagents at 123 High Road Benfleet in the Autumn of 1963. By 1964/65, I had joined the Choir at St. Mary’s, largely because my friend Rozzie Howard from Hillside Road was a member. Her brother, Richard, was in the choir too – and both of them often got to sing the anthem during the signing of the register during weddings. If I remember rightly, the choir received 3/- per wedding, and some summer Saturdays we could have as many as four. I was far too shy to sing solo, but enjoyed singing with the rest of the choir.

In the choir at that time, were the elderly Carters – I think their names were Margaret and Frederick, Mrs. June Bettany, (their daughter), Miss Muriel Jewell, Annette Cooper, who was a talented young pianist. There was a middle-aged slim lady who sang alto. Mr. Stan Russell was a tenor. I can’t recall the rest of the names. There were quite a few quite small boys and girls as well, who occupied the front choir stalls. Mr. Jordan was Choirmaster and Organist. Rev. Alec Banks was the Vicar. The Sacristan was Norman Cerson. I don’t know whose wedding photo I have, but I think it was around 1966. I am on the right of the photo, standing at the back next to a tall gentleman (Mr. Carter?) who is next to Stan Russell. Richard Howard is on the far right of the photo in the front row.  On the left of the photo behind the crossbearer, is June Bettany and Mrs. Carter.

I remember we used the English Hymnal and sang Anthems for special occasions. One of my favourite pieces was Stainer’s ‘God So Loved the World’. At the same time I was a member of Benfleet Choral Society, and I remember performing in Handel’s ‘Messiah’ and Bizet’s ‘Carmen’ when we did a concert called ‘Sacred and Secular’ in Leigh-on-Sea in the early 1960s. I still have a fondness for choral music, and have enjoyed this year’s Proms.

The choir travelled up to Westminster Abbey for the 900 years celebration on Saturday 25th June 1966. We travelled in a draughty old green double-decker, and it was high adventure, because I had never been to London. The Abbey was totally overwhelming, and I was very impressed with the individual lights with light shades in the choir stalls. I think I still have the commemorative booklet somewhere in the loft – an impressive blue and gold affair.

There were summer fetes in the gardens of Walnut Tree Cottage at the bottom of Essex Way. It never seemed to rain. The Hall was still in School Lane in those days, and I saw a production of Noel Coward’s ‘Salad Days’ there. They were indeed ‘salad days’!

The Carters often swum off a jetty near the houseboats in Benfleet Creek in the summer. I went with them just the once, because I was none too keen on what I saw floating past me. There was also a terrific current and I was warned to keep away from the deep channel in the middle.

I wonder if anyone still remembers those times? Sadly, I expect many have passed away, it was over 50 years ago!