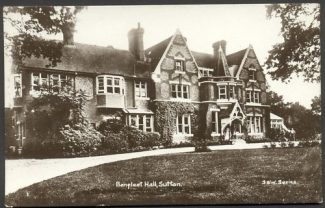 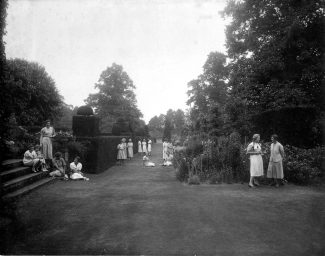 zoom
Some of the staff and pupils in the grounds of Benfleet Hall c.1930s

Benfleet Hall was one of two manors covering the Benfleet area  –  the other smaller one was Jarvis Hall. It was located in the area now occupied  by undertakers and the Methodist church. In time they both came to be owned by one family  –  the Appletons, but not for long as the family ran out of male heirs(circa 1710). While Jarvis Hall still exists, Benfleet Hall does not alas…the circumstances of its demise a mystery to me at present.

Fast forward to the nineteenth and twentieth centuries and you find Benfleet Halls springing up in Surrey. What’s going on ? Surely Surrey is landlocked and cannot claim to have tree-lined creeks (Beam = tree, fleote = creek).

First port of call was the Surrey Records Office, who confirmed that in 1860/61 a house designed by Phillip Webb  was built in Cobham for the artist John Roddam Spencer Stanhope and that it was originally called “Sandroyd.”

The name changed to Benfleet Hall at the behest of Miss Helen Gifford, who had been the Principal of the Marie Souvestre School in Sutton.  Having  failed to find any connection between this lady and Benfleet, Essex, I moved on to the Local Studies and Archives Centre at Sutton.

It was apparent that in moving her school from Sutton to Cobham she had retained the house name that folk would be familiar with. So why Benfleet Hall in the first place?  If she had chosen the name, why use Benfleet and not Benhill ?

Trawling the internet for any reference to Benfleet Hall and Sutton, I came across a familiar name… which I then checked against the 1891 census . This confirmed that the head of the household was one William Appleton, a (rich)tea and coffee merchant, aged 69. He was not in residence at the previous census, so we can assume the name changed at some point between 1881 and1891.

Presumably another branch of the family,  but exactly what the connection is I know not. Any information would be appreciated.