"An interesting example of engineering, but not of architectural note" 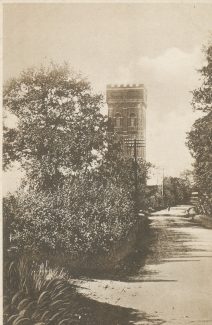 That Essex is home to a number of haunted inns and churches is well known, but to a haunted water tower? But then, Benfleet Hill Water Tower is no ordinary construction.

Although it has never been tested for poltergeist activity, Benfleet Water Tower is apparently home to some supernatural presence, as several witnesses have testified.

Paint pots have visibly moved on their own accord and strange noises have been heard in the tower when there has been no one else about.

Scary though this may be to some, the blame for these activities is actually laid at the door of a resident poltergeist, nicknamed  Herbert, who is not a destructive sprite, but is considered to be user-friendly.

Quite why the tower should be haunted is not clear, but it could have something to do with the history behind a plaque on an inside wall on the ground floor of the structure which refers to an incident involving two policemen there in the 1920s.

The inscription is unfortunately difficult to read and attempts to discover its significance through an appeal to the local newspaper have proved unsuccessful.

One of the main criteria for selecting a water tower site is that of high altitude in relation to a surrounding area.

Since the principal functions of such a tower are water storage and pressure regulation and since these are best effected from a structure which is situated at a higher level than the area it serves, water towers are always located on high ground.

In the case of Benfleet Water Tower, the high ground is the northern bank of the river Thames, making the structure a major landmark for shipping on the river and a major vantage point for those who are privileged enough to be able to climb to the top.

An alternative solution to the cause of all the ghostly activity is that perhaps the site was once used for pagan worship or for a beacon.

Whatever the case, Benfleet Hill Water Tower has probably one of the most interesting histories for a structure-type that is not normally associated with education or enlightenment.

Completed in 1903, it is one of the distinctive towers in Essex. Built of brick and, at ninety feet high, one of the tallest of the early towers, it has spreading foundations corbelled out to 7ft 6in wide.

The architect Anthony Blee (senior partner in the Sir Basil Spence Partnership) described it as an interesting example of engineering, but not of architectural note.  Nearly one hundred years later, Tony Crosby, author of “the Public water supply industry in Essex 1850 – 1939” begged to differ :  “Built in a highly ornate architectural style, this is one of the most impressive examples in Essex”.  Crosby’s full description is as follows :

The tower is built of red and blue brick in the romanesque style mimicking a castle tower having crenellations and machiolations on the underside of the panelled parapet. Each facade has central and angle pilasters forming two bays on each face and at each of the three floors. Each bay contains a round-headed window with metal glazing bars except on the ground floor which has a matching doorway. Blue brick is used on window arches, imposts and cills.

The 40,000 gallon cast iron tank was last used for water storage in 1957. Since then, the building has had a fascinating history.

In 1967 the electronics company Pye recognised the benefits to its business of the tower’s advantageous location and uninterrupted views and installed radio equipment inside it and placed a transmitter aerial on the roof.

Twelve years later, the freehold of the property was bought from the Essex Water Company by Shiftall Limited, a company which continued to develop it as a radio site, initially in conjunction with Pye and later for a whole host of other companies.

To accommodate the increasing amount of radio equipment and allow for the extra play in the tower which was being generated by a new 61 foot high radio mast, Shiftall carried out a considerable amount of restoration and strengthening work on the structure.

Then, on October 6, 1981, the tower was declared a grade two listed building by a “spot” declaration. This gave due recognition to the building’s architectural importance but also made subsequent developments there slow and costly to undertake.

Nevertheless, a new 75 foot mast replaced the original 61 foot one and the number of microwave dishes and aerials attached to the tower continued to grow, as companies such as BBC Essex and Essex Radio, as well as a number of smaller firms which rely heavily on radio communication, began to buy into the communications facilities on the tower.

Floors, offices and a new set of stairs were all installed inside the hollow structure to improve the environment for those working there, though the water tank itself remains in situ because it would too tortuous an operation to try to remove it.

The top of the tower, for those lucky enough to be allowed to make the climb, affords fantastic views of the surrounding countryside – the Kent coastline  across the Thames, the towerblocks of Southend, the church at Danbury, nearby Thundersley water tower, the Ford buildings at Basildon and Great Warley and, on a clear day, Tower Bridge and other London landmarks.