The House Within A House

A Victorian Overcoat over a 200 year old frame 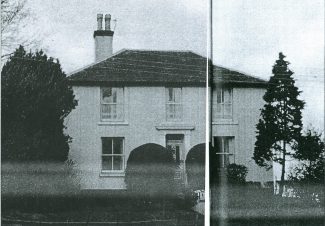 zoom
Highlands
From the March 1988 edition of Period Homes

It is not every day that Clive Smith, who runs a demolition company on Canvey Island in Essex, finds a 200-year- old box frame hiding behind a Victorian overcoat.

He’s knocked down near enough 500 buildings over the past 20 years but never a house within a house.

Peter Richards, Historic Building and Conservation Adviser of the Essex County Planning Department, who looked at Highlands while it was being demolished by Clive and his team of workers from B and C Plant Hire, identified the remnant of an 18th century timber frame encapsulated within the later Victorian house.

The frame consisted of walling to three walls within the building mostly at floor level. Roof and floors of the 18th century building had all been completely replaced in the 19th and 20th century. A proportion of the timbers, he recalls, were oak, others were identified as elm.

Much of the timber was in almost perfect condition and had been painstakingly coded with Roman numerals, notches and saw blade cuts.

The location of Highlands at the top of Essex Way in South Benfleet is one of the highest points of land in the area and commands magnificent views of the Thames estuary.

In Clive’s opinion, the fresh air from the sea and windy conditions were one of the reasons why the timbers, although neither stained nor blackened, showed few signs of decay. Only 10%, near the chimney stacks, were affected by wet rot.

Peter Richards points out that it is always difficult to determine why hardwood timber frames survive in some areas better than others. It is often the case that it is the lower timbers which suffer initially because of their connection through the brick plinth, with the ground and consequently with rising damp.

At Highlands it was the upper storey timbers which survived, indicating that the lower storey wall timbers had suffered probably from wet rot. The box frame found is about the size of a 5-bedroomed house, two storeys high with a third level underground taking in huge cellars.

History of the House

It-appears that around 1840, the original building was encased by yellow stocks. At some later date, the front and all other sides of the house, except the west side, were rendered.

Denis Warren, regional director, and Jo Holloway, residential property manager of Abbotts in Rayleigh, were involved in the sale of Highlands by auction at the Shrimpers Club, Roots Hall, Southend-on- Sea, on September 24, 1986. It was only after the new owner of Highlands ordered its swift demolition to make way for a new, 5-bedroomed house that its splendid secret came to light.

It is believed that in the late 1800s, Highlands was owned and occupied by the Watts family, local builders, and they were followed by the Gilletts.

Highlands remained in the Eldridge family for the next 75 years until 1986.

In 1911, Austin Eldridge, a farmer, had moved from Ludham Hall, Braintree, to Highlands. With his wife Rose he turned it into a guest-house which was much loved by servicemen from all over the Empire, nurses and others in need of recuperation.

Happy Occasions in the House

The house must have seen many happy occasions for the guest book which spans the years 1911 to 1938 is filled with memories of Highlands and its hosts – touching words of gratitude interleaved with sketches, drawings and poems like the one below:

From Benfleet 1/4 of an hour
Brings you to the Water Tower
Which is Highlands
Landmark many miles around
When you reach the house
I swear
You’ll be jolly glad you’re there
You’ll think it’s just a bit
Of heaven that you’ve found.

Just like the nurses, Winifred Eldridge had been a guest, sent there as a young girl to recuperate and benefit from the health- giving properties of the fine air. She promptly fell in love with her hosts’ son Busick, known to his friends as Basil. They got married and spent their lives at “Highlands”. When Basil died in 1983, Winifred stayed on until the house was sold three years later.

Her son Peter recalls that in the 1920s, the house also provided accommodation for agricultural students. Being a big house with a fireplace in every room, his grandfather had to order coal by the railway wagon load which in those days was taken to the house by horse and cart.

The huge cellars did not just store coal but the family’s supply of wine and during the war years, they could shelter up to three families at a time. Because of its cellars, Highlands was referred to by the locals as “the safe house”.

How the secret was kept

The secret of the house within a house remained safe for so long because successive owners never felt the need for structural changes. The house had not been pulled about because people were perfectly happy with it. In fact, electric light was not installed until 1949 and since all the wiring was fixed to the surface of the walls, the box frame building remained shrouded until Highlands was demolished.

The Future of the House

The moment Clive Smith set eyes on the box frame, he fell in love with it, dismantled it with the greatest care and made a plan of it as he went about his difficult task.

His dream is to re-erect and re-construct it, preferably on Canvey Island, his home town, where most of the old houses have vanished. He believes that the people of Canvey would love to have it on their doorstep. And he knows just the place for it, a plot of land in the town centre where his unique time capsule would attract natives and tourists alike.

However, staff at Basildon Council’s Wat Tyler Park at Pitsea have also expressed keen interest in giving it a new home. For the time being, home is somewhere on the premises of Canvey’s football club.
At the time of Clive’s discovery, an Essex County Council spokesman said about his find: “The remains were of insufficient quality and extent to warrant listing the building as being of special architectural and historic interest.

“Unfortunately, the timber frame discovered was too fragmentary to enable a conclusion to be reached as to the nature of the building,” said M.C. Wadhams of the Essex County Council Planning Department.

Yet Clive Smith remains convinced that he uncovered a gem, possibly a jewel for Canvey’s crown. The closeness of the studs, some of them are just 8in apart, suggest to him that it must have been the home of a fairly wealthy local family.

Investigation of the Records

I decided to investigate in the Records Office of Southend Library.

First, I had to track down from documentary sources what stood on the site'” in the late 1700s and find the answer to the question: Who decided for what reason not to demolish the original house, not to merely give it a facade but to encase it entirely with a Victorian overcoat. I wanted to find out whether the original house, now reduced to a box frame, true to one of its former names Folly House is just a folly or worthy of reconstruction, perhaps not for reasons of architectural merit but because of its past owners and occupants.

The Chapman & Andre map of 1766 and 1777 shows Folly House on the site of what later became Highlands. Folly house also shows up on the tithe map dating back to around 1770 while on the tithe map of 1840, the house (plot 238) turns out to be called Woodlands to which H.E. Priestley M.A., Ed., PhD. and Wyn T. Phillips, M.A., L.CP. lead us in their book History of Benfleet (book two):

“In olden times a person going on foot from South Benfleet to Hadleigh would walk up the Endway (the present Essex Way), passing on his right a number of half-timbered cottages, their front gardens bounded by railings and hedges, with rickety wooden gates; and on his left would have been the Anchor Meadows.
After less than half a mile, The End-way would true to its name, come to an end and the rest of his way would be along the ascending field path until he joined the old road leading from Vicarage Hill. The spot where the two joined is today marked by the old Water Tower. Opposite is a patch of woodland. Joining the old road he would pass on his left the farmhouse Hobleythick occupied by William Cross, then an adjoining house and garden where Susannah Benton lived.”

Who was this Susannah Benton? I found her listed in the parish rate books from 1838/1840 as the occupier of plot 238 (house and garden) owned by Daniel Nash.

Her name cropped up again, this time in The Abstract of Title to various Farms and Hereditaments in the County of Essex belonging to Mr. Daniel Nash and his son Mr. Daniel FKP Nash dated October 31, 1826.

It mentions a legacy of £2,000 for the benefit of his daughter Susan Benton and her children. Benton’s History of the Rochford Hundred tells us that the houses Suttons as well as Hadleigh Cross belong to Daniel Nash of Woodlands and that the family have been occupiers and owners in the neighbourhood for about a century; they had estates in Hadleigh, Canvey, Rayleigh and some houses in Prittlewell.

Perhaps Woodlands having been the family home was encased by Susannah Benton to gentrify it in style. Having been left a considerable sum of money, she would have had the means to do it. No mention is made of her husband. Why we do not know.

This article by Eva Boyd originally appeared in the March 1988 edition of Period Homes magazine.

Sadly Clive Smith is no longer with us having died a number of years ago.