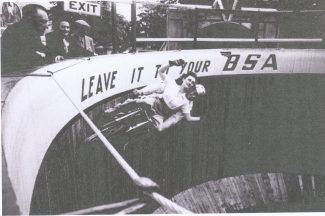 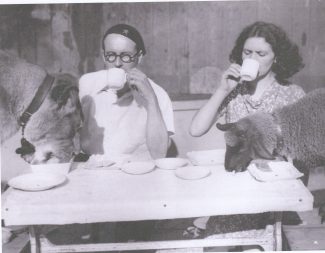 zoom
Tornado Smith, the wall of death rider from Southend, and his wife having tea with their pet lion and lamb
corbis 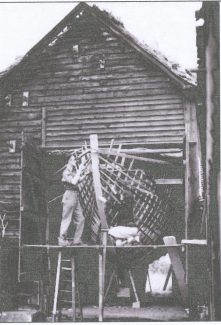 George William Smith, born in 1908, from Boxford, Suffolk…..later known as Tornado Smith was the first person to import into this country, from America, a “Wall of Death” facility and the first to ride it.  Though he rode at many locations spanning four decades, his main base for much of the time was the Kursaal, Southend.

Among those he trained in this daring form of entertainment were two participants who stand out  –  firstly Marjorie Dare whom he married in 1934 and who rode her own Indian Scout. The second was a twelve stone lioness called “Briton”, who didn’t ride her own bike, but sat on the handlebars and later in a sidecar.

Tornado was a consumate entertainer and would regularly come up with new ideas…he was the first to drive a car (Austin 7) around the wall and often rode with a coffin instead of a sidecar, with a skeleton for a passenger. He even rode a pennyfarthing around the streets to advertise his show. The pennyfarthing was also used to protest about high rates and it was with pennies and farthings that he once  paid off a speeding fine.

So what is his connection with Benfleet? In 1938 he and his wife were busy building a boat to take them around the world and where were they doing this? You guessed …Benfleet. To be precise he was using one of the barns attached to Hall Farm, which was home to Howard Dairies at the time. Unfortunately in 1939 Benfleet Hall and some outbuildings were destroyed by fire, including the barn they were  using.

In 1966 Tornado and his wife left for South Africa, where he died in 1971.It was reported that he departed owing money and later declared bankrupt. When he died however, he left £100,000 ! In newspaper reports he was variously described as a “Gentle Daredevil” and a “Kindly Miser”, the latter being the preferred description of the tax investigators.

I have found no record of any further attempts to build a boat to sail the world, so maybe the dream died in the Benfleet fire…