Are the words connected? 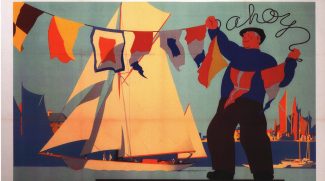 zoom
Ahoy in use during the golden age of travel posters 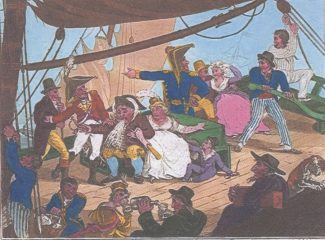 If you want to know what a hoy is, then you have a problem. There appears to be a consensus that it is a boat, but beyond that you can take your pick! A fuller definition can be found in the Oxford Companion to Ships and the Sea:-

The Hoy had no definite characteristics as such

“A small coasting sailing vessel of up to about 60 tons, in England usually with a single mast and fore-and-aft sail, sometimes with a boom and sometimes loose-footed and used largely for carrying passengers from port to port. Hoys in Holland mainly had 2 masts, usually lug-rigged on both. The hoy had no definite characteristics  as such, being any small coasting vessel which might, in other places, be called a sloop or a smack.”

What is more difficult to establish in connection with boats, is what the word derives from. We know from the Oxford English Dictionary that it comes from the middle Dutch word “hoei”, but beyond that the origin is not known. We also know that it first appeared in written English in 1495.

Meanwhile “ahoy” meaning to hail a ship or person so as to attract attention stems from the middle English cry, Hoy!  Ahoy appears in print for the first time in the 1750s.

The word had fallen into obsolescence before rising from obscurity as the sport of sailing rose in popularity. The word can also be found with similar pronouciation in several other languages. In Czech and Slovakian “ahoj” is a common colloquial greeting, while “hoi” is used in modern Dutch as an informal greeting equivalent to “Hi” or “Hey”.

Ahoy as a universal greeting

It is certainly viewed as a nautical term (see accompanying poster), though it would have enjoyed wider usage if Alexander Graham Bell had had his way. He wanted “ahoy” as a universal  greeting when answering the new-fangled telephone, but lost out to Thomas Edison’s “hello”.

It may be that Finch and Benham’s notion that a hoy implied a regular service carrying goods and people up and down the creeks of Essex, Kent and Suffolk provides an explanation.

Shallow vessels were ideal for manoeuvring in the tidal Thames and were able to access the creeks of Essex and Kent where larger vessels could not. Perhaps these scheduled stops operated on the same basis as a “Request” bus stop. To avoid berthing at every stop unnecessarily, the hoys came within hailing distance of the shore and only landed if they heard the cry “A Hoy”, later to become “Ahoy”.

Who can gives us a definitive answer?  Perhaps those nice people at the Greenwich Maritime Museum might be favourite. In response they quoted from Admiral William Smyth’s Sailors Word Book published in 1867 :-

“A small vessel, usually rigged as a sloop, and employed in carrying passengers and goods, particularly in short distances on the sea-coast”

The Museum also provided the following back-ground information on Hoys:-

“It’s usually a gaff-rigged sloop (ie one mast) with a jib and bowsprit, and capacious for its size for carrying people or goods. A faster and bigger version would be called a cutter, and a hoy or cutter used for fishing called a smack, but they are essentially much the same; as Smyth also points out the navy used to describe them by uses such as powder-hoy, provision hoy etc and Sam Pepys speaks of the “Marget hoy” (ie the Margate hoy) which lasted until the early C19th century as the quite large ones which took trippers down from London to the north Kent coast, notably Margate. See the wonderful accompanying caricature by Thomas John Dibdin.”

In today’s Margate you will find a pub called the “Margate Hoy”, one of a number pubs with Hoy in their name dotted around the country.  However  our Hoy is the only one remaining in Essex, though Tollesbury did have one, which interestingly was renamed the “Ship Ahoy”.

Smyth continues: “‘To hoy’ (verb) is to urge on with shouts and ‘a hoy’ (noun) is the call from aloft.” However Wikipedia says, regarding Margate-type hoys: “These were known by their destination as Margate or Southampton hoys and one could hail them from the shore to pick up goods and passengers…”

Not perhaps proof positive, but there is no reason to think that the hailer would not use the term ahoy when communicating with a hoy.