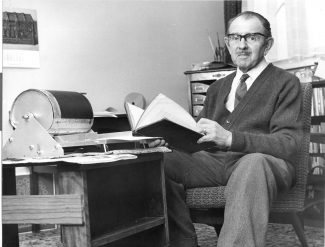 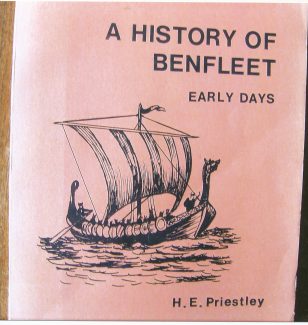 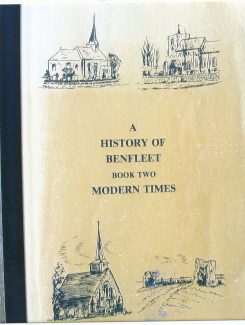 Born in Yorkshire in 1901  and died in Essex in 1990. His writings and artwork feature in the Art and      Literature category, but these were only 2 facets of his life.  Above all he was an historian and his two books on the history of Benfleet bear testimony to that.

He was also a leading light in the Benfleet and District Historical Society and often lectured in other Essex locations. An example  would be his delivery of the Voss Memorial Lecture in Rayleigh in June 1965 on the subject of Essex churches :-

Lacking stone the church builders used rubble, ragstone and flints mixed in a wooden frame and strengthened with Roman tiles for the walls and saved the few big stones for the corners. Local examples of churches built in this way include Hadleigh and Benfleet. In Henry 8th’s time the dissolution of the monasteries provided a source of stone for domestic use. Much of Hadleigh Castle  was sold off for its stone. As early as the fourteenth century bricks were used, but more so in tudor times.

Speculating that the oldest chuch may not be St Peters on the wall at Bradwell, he suggested that there was evidence from excavations that Prittlewell had an earlier Christian settlement. Priestley went on to say that while churches nowadays are seen as fortresses for the spirit, in the middle ages , especially along the Thames, they acted as safe havens from potential raiders.