Details about his life 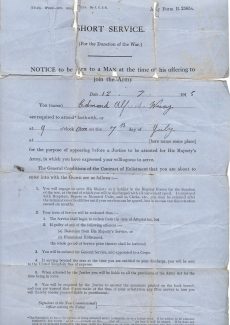 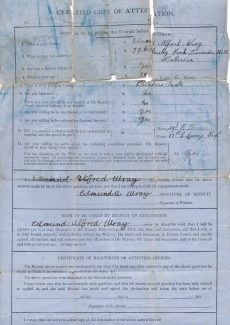 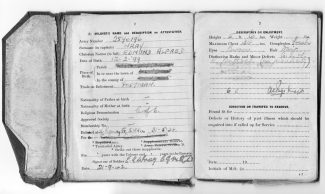 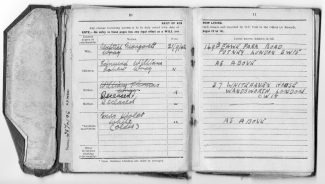 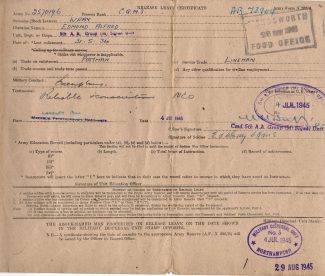 Janet Walden the Chair of the Canvey Archive passed images of some military records across to us that belonged to Edmund Alfred Wray. We have used these along with some records from Ancestry to piece together these facts about his life.

Mr Wray was born on the 12th February 1899 in Battersea to William Thomas Wray and Mary Ann Kate Wray (Bean). He grew up in Battersea and had two brothers and two sisters.

He joined up on the 7th July 1915 and claimed as far as we can see that he was 19 years and 6 months old. In reality, he was just 16 years and 5 months old. It was not unusual during the First World War that no checks were made on age. At the time Mr Wray was a plumber’s mate.

He joined the 13th Battalion of the East Surrey Regiment which despite the name was formed in Wandsworth on the 28th August 1915 (up until 1889 Wandsworth had formed part of Surrey). He performed various duties for the Battalion including studying at the Brigade Signalling School and passing the exam to become as Trained Signaller First Class on the 25th March 1918.

In April 1918 he was drafted to France where he took part in the fighting on the Somme and other engagements. He was severely wounded (probably a gunshot wound to his right buttock) and invalided home. On his complete recovery he was transferred to the 6th Battalion of the East Kent Regiment (Buffs). He was demobilised on the 5th June 1919 as a private.

Although he joined in 1915, he was not entitled to the 1914-15 Star as he had not served abroad during those years. He did get the British War Medal and the Victory Medal.

After the war he got married to Beatrice Margaret Topp and in 1925 their only child Edmund William Robert Wray was born.

Mr Wray enlisted in the Territorial Army on the 31st May 1934 and according to the British Postal Service Appointments Book he became a postman in 1935, supported by the picture in part 1.

He was a lineman Instructor from the 17th May 1940 until !4th August 1940. He was then transferred to running the stores, as CQMS until the end of the war.

His Service ended on the 4th July 1945 when he was discharged with Military Conduct ranking of “Exemplary” with a Testimonial of “Reliable Quartermaster”.

We believe he continued to work for the Post Office after the war.

In 1962 he moved to Benfleet living in Greenways.

In all he had served in both World Wars, survived, and ultimately died at a considerable old age.