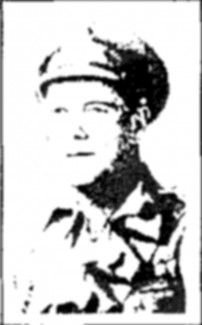 In 1911 he was single and a groom and gardener to the Bergmann family and living with them at “San Souci” (No. 51), Thundersley Park Road.

He later married and they had a child. His wife Nellie Florence Louise Newman lived at 1 Thundersley Park Road in 1918.

He was a member of the Essex and Suffolk Battalion of the Royal Garrison Artillery, and was mobilized at the outbreak of war, serving in France, Egypt and Italy.

He lost his life in Italy on 25th March 1918 aged 28, when his observation post was hit by a shell. His wife received the following letter:

It is with the deepest regret and sympathy I learn of the death of your husband. Will you allow me as his commanding officer at Monkhams and previously at Shoebury to state that he was one of my dearest gunners, and one whose loyalty and great devotion to duty at all times made me very, very proud of his profession as a soldier. Please accept my sympathy again in your great loss.

This letter was dated April 19th, four days prior to Major Robertson’s death from wounds.