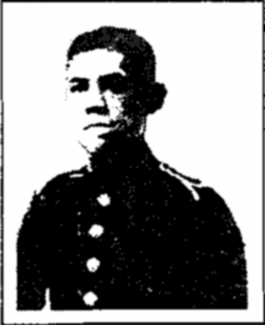 Private Harry Henry Christie (10) was born in Shepherds Bush in 1893. He joined the 2nd Battalion of the Suffolk Regiment army at Ipswich in 1911. At the time of his death he was somewhere on the Ypres Salient, which was under continuous attack, as happened for Private Harold Browne (7).

We know little about him. The Southend Standard report on the 22nd June 1916 and the Essex Roll of Honour in the Essex Newsman of 24th June 1916 say he was from South Benfleet, but no other records are available. There is no one with his family name on the 1918 Electoral Register.

What we do know is that his name was not put on the War Memorial at its unveiling. It was added much later, most likely after WW2 when it was inscribed with the WW2 inscription.