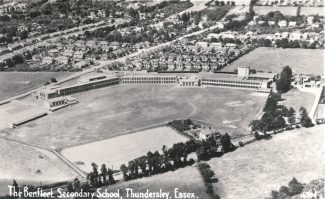 Memories of my school days

My parents and I chose King John for its reputation even though we were out of the area and Appleton and Chalvedon would have been closer to us in Bowers Gifford.   Every morning, I got off the no.2 bus and walked the long walk up Shipwrights Drive.

Uniform was compulsory but it was a practical, relaxed version where blazers and ties were not required.  As long as we were in the school colours, black, grey, white and red, it was ok.   In my first year, I remember seeing older girls in very long black capes, but only a few and that soon disappeared.

For registration time, at the beginning of the day and after lunch we were in multi-year tutor groups.   I was in ‘Napier House’ and I think it’s because my tutor room was in the maths block.   In our first year, all the girls had Rubella injections one Monday morning.

My friends included the twins Linda and Joannah Balls, who travelled further than me each day, because they lived in Basildon and had a reputation as ‘swots’.  Then petite Linda Rixon, Nicola Baguley, Lynn Bickford and Lizzie Karslake, whose sister was married to one of the Rolling Stones and who lived in The Vicarage on Vicarage Hill.  Other friends, whose surnames I can’t remember, were Andrea, Josie, Tina, who lived on a parallel street one west of Shipwrights Drive, another Johanna who lived close to school in the other direction.

I was put in 1.11 and this was my class no matter the subject.   The school quickly told us that, as there was no streaming in a comprehensive, 1.11 was no different from 1.1 etc and that the standard of lessons would be equal and it wasn’t about how bright you were.

I have ‘snapshot’ kind of memories about lessons:

Humanities with a teacher who, I suppose because he thought it would appeal to us in 1976, called himself ‘Bionic Mr Howard’.   In the 3rd year, when we were short of desks, I sat in a group of three on a double desk with Lynn and Lizzie.

English with a wonderful old-school teacher who must have been near-retirement, in a classroom next to the Library.   She taught us ‘bread and butter English’, almost apologetically and I’m glad her traditional ways held firm.  Another year, a younger teacher had us giving presentations and, for some reason we all chose to talk about our pets.  I took in a photo of our cat ‘Scampi’ and the talks were only really interesting when someone who lived closer actually brought in the real thing.

Home Economics was with equally old-school: Mrs Roby’s classic line was ‘No mother in her right mind would put a casserole in the oven without a pudding as well’.

German in a pre-fab classroom with a teacher who would eat garlic rolls and pour coffee from a flask the whole lesson, more engaging than the declensions.   Thankfully language teaching has changed now – all I can remember is ‘Nominative, Accusative, Genitive and Dative’ and ‘Das Fahrad’ ‘Die Fahra”der’.  I can’t tell you what nominative means and I can’t ask if that’s you’re bike, or hire one, or say mine needs mending.

Cross country running in the winter, squelching through the woods beyond the ‘rec’ and wondering why we couldn’t do this in summer when it’d be so much more comfortable.  Then, in spite of being hot and muddy, not wanting to undress and shower.   We used to wet the ends of our hair to show the PE teacher we’d gone through properly.  What made it worse was when she then began to stand on a bench in the changing room so she could see into the shower area.

In Music, we’d sing lovely, lyrical Irish folk songs if it was the older teacher, listen to the Bonzo Dog Doodah Band with the younger one.

History was one of my favourite subjects.   Preparing for our ‘O’ Levels, we had to write imaginative essays and I loved that, it was about people then, not just power and dates.

Geography was another favourite.  I had a crush on Mr Twigg and was fascinated by all his lessons, then worked really hard on his homework, always getting ‘A’ grades.   It was a shock when he told us before we broke up for Easter, that he was leaving.  Revision classes with another teacher were of no interest to me and I used to look out of the window on sunny days at PE lessons in the field. In the exam, I wrote an essay on the French oil crisis and we hadn’t even studied that part of the curriculum.  I was lucky to get a ‘D’, I thought.

All our teachers used blackboards and chalk.   The blackboards were the kind where a large bendable loop was rotated vertically round a floor-mounted wooden stand.  This meant the teacher could have more than one board in a lesson, and the more organised ones would push the roll up to reveal e.g. a prepared maths problem, or our homework.

In our first year, we went on a school trip to Belgium and there was a Geography field trip to Dorset, where we stayed in a hotel in Poole and sang about Chesil Beach to the tune of Martha and the Muffins’   ‘Echo Beach’.

We had a tuck shop …We had a big field behind the school, the other side from Shipwrights Drive and this served for hockey etc, and in the summer, lunchtimes meant playing rounders there with my group of friends.   Over the other side of the field was a building we used as a youth club in the evenings.

In Sociology, I did badly in the ‘mocks’, so was told if I wanted to take it at ‘O’ Level, I’d have to ‘double enter’ – for that and the CSE.   As the syllabuses were different, that meant twice the work, which I resented.  This problem was soon solved for those after me, as the two-tier system was replaced by the GCSE a year or two later.