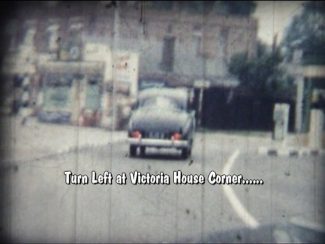 This film of a high speed car ride, thought to be in the early 1960s, starts on the Arterial Road in Southend travelling in the direction of London. At the Rayleigh Weir, which was then a roundabout, we turn left to travel along the Rayleigh Road, past the Woodman’s garage to Victoria House Corner, which can be seen as it was before the roundabout was constructed.  The car then turns left along the A13 London Road to pass through Hadleigh on the way to Leigh where it makes a right turn into Leigh Gardens and eventually stops at Marine Parade.