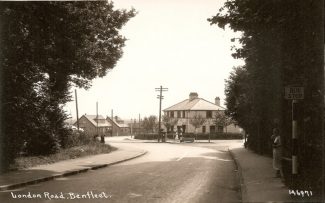 I have some very nice memories of Howard’s Farm in Jotmans Lane, I went out with a very nice girl from there, Kathy, her father ran the farm at the time, long before it became something else. There was, I recall a very fine bull on the farm and he was massive but seemingly well tempered and certainly seemed to enjoy being petted.

Her father had a great interest in his garden and large amounts of vegetables were grown on it, no doubt to help feed the family.

The elder daughter married and had a child but I often met her husband prior to their marriage. Stan at that time drove a Sunbeam Alpine, was it the Tiger? Whatever its name it had the V8 engine and was considered a superb motor at the time, drop head into the bargain, made my Austin A90 seem a bit tame in comparison.

At the time I was in the Merchant Navy and would be away for three or four months at a time and regrettably it proved too much for us and it just sort of drifted apart to my regret but I can still remember how I would look out from the train from Tilbury to Benfleet on my return, and then of course the last view as I re-joined my ship and would be away again for some time.