Memories of a one-time resident 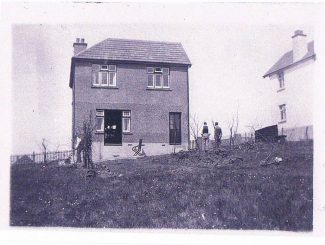 zoom
Rear view of Joandi before the verandah was added. Note the space between the neighbour's property
Anonymous 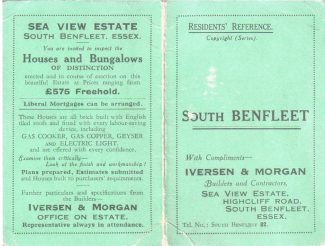 I have fond memories of visiting South Benfleet when I came to visit my grandmother.  She lived in a grand house in St Mary’s Road, built in about 1923.   There were four designs – two houses, a bungalow and one which, today we would say, had rooms in the roof.   Hers was a three-bedroomed detached house and a bathroom upstairs with two rooms on the ground floor and a kitchenette.   It stood on its wide plot proudly looking out over Benfleet Creek towards Canvey Island.   A covered verandah was later added at the back – it was a real sun trap.    The house was part of the Sea View Estate marketed by the builders Messrs Iversen & Morgan of Highcliff Road.

It was called Joandi and faced the top of Highfield Road.   It does not exist now having been demolished for the redevelopment of the site.   For me, Joandi was a magical place.   The Downs was nearby and this was just wonderful – we were free to play there and wander through the woods and paths.   (Joandi would have been number 50 after properties in the road officially lost their names  in the mid-fifties)

I recollect some of the neighbours.  Along the road lived a Commander working for the P & O line.  He would wave a sheet as a flag to his family as his ship moved up the Thames.  A house inhabited by five sisters was there too.   There was a large double fronted house called Gable Lodge (later numbered 14) which, according to popular belief, was visited by Clark Gable at one time.  Was that why it was called Gable Lodge?

Much later I remember going to Southend, particularly to the Pier and Never, Never Land.   Travelling down the Pier in the ‘toast rack’ carriages of the Pier trains was an experience.  At the Pier Head Theatre Ben Oakley’s band played.   Visits to the Mascot Cinema in Westcliff to see Abbott and Costello films are remembered with affection and at Chalkwell Beach there was Punch and Judy.

Childhood memories become very real and we remember for the good times.  Trudging up an unmade Station Road from the station itself was not so pleasant but even this was moderated by the excitement of being free and happy.