My Family and Childhood 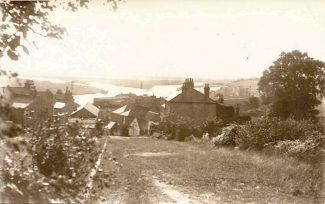 zoom
Station Road. The Parkers' Cottage is on the right
R.F. Postcards 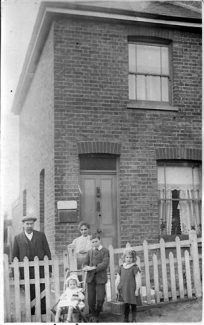 zoom
The house in 1911
John Downer 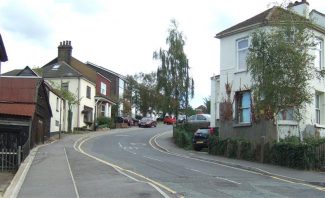 zoom
The house still there in 2011 (white cottage)
Mike Day 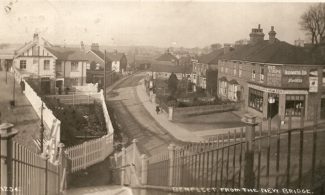 zoom
The view Joan would have had from the bridge.
R.F. Postcards

The Archive has received an article written by Joan Norris (nee Parker). Sent from Australia by her husband, Arthur Norris, it gives a fascinating account of her young life in Benfleet. Her parents ran a grocery shop in the Parade of shops at Tarpots. Here Joan recalls childhood visits to her grandparents.

To complement her story, Joan’s cousin, John Downer, has given us the following family background information.  John begins.

“Joan Parker’s father (Wesley Brooke Parker) and my mother (Dorothy Harriet Parker) were brother and sister and the family lived in the ‘downhill’ half of a pair of villas in what was then an unmade Station Road.  It was called Mount Pleasant.   In addition there was another sister, Edna Grace Parker, the youngest of three children and only 14 years older than Joan.

In the photograph, dated 1911, is William James Parker and his wife Ellen and their children, Edna, Wesley and Dorothy (better known in later life as Dorrie)   The plaque under the house name indicated that Granddad was an agent for the Prudential Insurance Company.

Joan’s parents, Wesley and Eleanor (Nell) attended the Methodist Chapel at the corner of School Lane and East Street (Essex Way) but as it was not registered for marriages they were married in St Mary’s Parish Church on 11th May 1922.

Before the wedding Nell lived on Canvey Island and worked in London.   She walked to the Creek across farmland and narrow tracks.  At low tide she crossed the Creek using the stepping stones.   If the tide was in she used the small rowing boat to get to Ferry Road and on to the train at Benfleet railway station.   The reverse was operated at night in all weathers and with no lighting at all.   What lighting there was came from one’s own lamp powered by paraffin or carbide.

Joan wrote “In my early years I spent a lot of time at my grandparents’ house, in Station Road, particularly at weekends when it was busy in the shop (at the Tarpots).The house only had two bedrooms so I shared with my two aunts, Edna and Dorothy. Both were single and lived with their parents, the Parkers, my paternal grandparents.

“The toilet  was outside, no flush, newspaper cut into squares and hanging on string as toilet paper, and a wide wooden seat that was scrubbed regularly until it was almost white. So, at night it was a case of using chamber pots, to be emptied each morning into a bucket and disposed of. Even at that young age I hated it. Bathing was a real ritual – a portable galvanised iron bath kept outside the house was placed in the living room with water heated on the Range, so necessarily used by more than one person! (Not a daily happening) Granddad was barred from the room during this procedure.

“As for the coal-fired Range, the only means of cooking, it was kept clean by regular cleaning with black lead, a very messy black polish. A large black kettle was always on the boil for a regular ‘cuppa’, but there was a Primus stove in the scullery that could be pumped up to boil water for the first cup of the day. The scullery also housed a deep sink for washing clothes and dishes, but none of the detergents we have today – a soap powder for clothes and odd pieces of bar soap in a wire mesh holder for the dishes.

“As I said, I spent a lot of time at Benfleet, usually travelling by bus on my own, having been put on at Tarpots, in charge of the Conductor. On arrival I made the short walk to the grandparents house on my own. At least that was what I thought, but learnt in later years that Edna discreetly followed. I never twigged that she always showed up shortly after me! In fact Edna, only 14 years my senior, was a genius at producing games out of almost nothing. She also made me pretty dresses and let me slop around the garden and house in her shoes! They had a dog-named Toby, but because I was unable to cope with him on a lead, I was given a spare lead with a rolled up cloth on the end, and named him Dinkiella. Probably not my idea! I would chat away to this pretend dog, taking him for walks all over the place. I was also allowed to take my imaginary dog for walks on the adjoining Downs, and when just a little older walk over open fields to meet Edna from her work. A freedom not enjoyed now. (Edna did house cleaning for several of the wealthier people who attended the Methodist church)

“The train station was just a few meters from the house, and from the windows you could see the London trains approaching way up the line, long enough for me to run down and stand on the bridge, jumping and playing in the smoke and steam as the train slowly pulled away from the station. I must have got filthy dirty at times. This was a favourite pastime for children.

“One still very vivid memory was outings and picnics to a popular forest area near Tarpots. These outings often coincided with early spring and early autumn. In the spring the woods were just one huge blue carpet of bluebells. There were also anemones, primroses, violets, and a pink flower that we knew as plum puddings, but it was the bluebells that were the attraction, and we picked bunches of these as there were no restrictions on collecting wild flowers back then. Most had died anyway before we got them home and in water.

“In the autumn we picked blackberries, I never much enjoyed the thorns and brambles or the staining of hands and clothes, but the large fruit tasted good! Likewise the pies and jams later.”

John Downer does not remember his (and Joan’s) grandparent’s house although a photograph exists of him being held by his father while visiting.  The house still exists although altered and with more modern windows

John’s mother, Dorothy (Dorrie) married from the house in Station Road in 1935 and she and Cyril were the first couple to be wed in Benfleet Methodist Church in the High Road.

John’s grandmother died before he was born so he has only knowledge of his granddad.   He lived with him and his parents in Brook Road and died when he was about 12.  He was very deaf and John regrets that he had little time with him as he just could not communicate.  His memory of taking down the football results every Saturday off the radio and filling the score sheets in the newspaper is vivid.