My Memories of Benfleet and Canvey Island.

The following article appeared in the 1974 edition of the Benfleet & District Historical Society journal.  It tells of Lilian Hart’s memories of her life on Canvey and subsequent move to Benfleet.

Mr & Mrs Hart are well known to many people in Benfleet having lived for many years in Kents Hill Road, and before that on Canvey Island.  Recently Mrs Hart decided to write the history of her life, chiefly to leave some record for her children, grandchildren and her friends as to what life was like in those places from the beginning of the century.

Her account was so interesting, amusing and informative that I was highly delighted when she gave me permission to reproduce it in our Journal.  For this I tender her on behalf of the Society our greatest thanks for I am sure that anyone who reads it will be amazed at the changes that have taken place and will be delighted in the way Mrs Hart has set down the story of her life, the good times and the bad, a unique and valuable record for all who come after.

Lilian Hart was born in Canvey Island on the first of October 1896.  We take up her story from when Lilian moved to Benfleet.

My Memories of Benfleet and Canvey Island 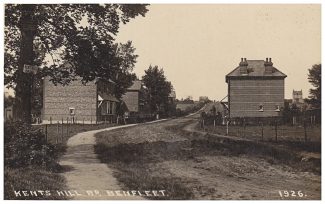 Kents Hill Road looking up from the High Road towards the London Road c.1926

I had tried for some time to get my husband to move on to the mainland if the opportunity came along, but I think he was loath to venture because of the shortage of work.  However, a great friend of ours had a niece whose husband was a partner in Raffin & Bonson Building Firm.  In the end Mr Raffin said he would provide work on the buildings if we decided to have a bungalow built on some of his land.  That is how we came to live in Kents Hill Road.  Mr John Harrison did not like it at all but he was a very fair man, he could see our problem and wished us luck and let us have his waggon and horses to bring our furniture all through the unmade roads to where we now live.  It really was a great thrill to think that we were standing on what we hoped would be our own place in 15 years time.  That was the first night in his 4 years that our son slept right through the night till 8 the next morning.

Bungalows then were not posh as they are today. One had to do one’s own decorating and fittings, just 4 rooms, a living room, sitting room and two bedrooms, all of a fair size and nice and square, a kitchen stove in the living room with a bath with a wooden top under the window on which you were allowed £75 subsidy if you agreed to have it, a sink in the corner with one cold water tap, no sewers but we appreciated that cold water tap after only having buckers of water on Canvey.  From then on we could use as much as we liked.  At this time there were only 4 bungalows and two houses and a church between here and the main road at the Benfleet end and only 6 houses and 2 bungalows on the left coming up.  One good thing, we always had a good bridle path on that side to walk on.

The road itself was deep ruts in winter time.  Later I remember when they were laying the pipes for the sewers I was looking out of the window towards Oakfield Road and I saw a man walking along and suddenly, disappear.  On going outside I heard a cry for help and found he had fallen down a manhole half full of water.  It sobered him up as he had been drinking too much.  The problem was how to get him out, no one was there to help so I had to get a plank and lay it across the top for him to hold on to till someone came to help pull him out.  I gave him hot tea and loaned him my husband’s raincoat to go home in.  This made more trouble for me because he never brought it back.  We still had to use paraffin lamps and candles.  Everything seemed to go along fairly well that summer.

Other memories of Benfleet were watching the horses being shod at the forge next to the Hoy Inn and being allowed to have a go at blowing up the fire.  Going to the church Institute that was on one side of the church gates and Knightley’s little paper shop on the other. All were pulled down long ago.  At the Church School up School Lane,  I think Mr Hall was the Master.  The Wesleyan Church was up the Endway (now Essex Way). 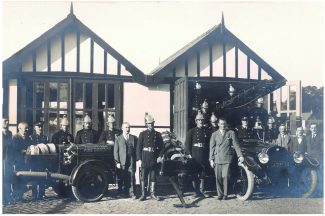 The pull and push fire brigade was housed in a temporary shed on the Anchor Inn field opposite School Lane, manned by volunteers like Charlie Powell, Ted Land, Wally Bingham and others.  Fire maroons  were kept at the Anchor Inn with a galvanised pipe outside the stables to fire them from.  That pipe now acts as an overflow from our compost pit.  There were all sorts of activities to get cash to support the fire brigade, a mile of pennies down the High Street, a sports do in the summer for everyone, held in the Anchor meadow and organised mostly by the fire brigade, the British Legion and others.  There was also a Torch light procession in November round about the 5th from Cemetery Corner to a huge bonfire in the same meadow, they were really happy events for a good cause. 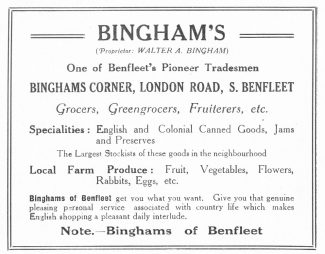 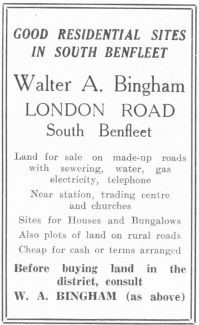 The British Legion was thriving then, having started from the Old Contemptibles who used to meet in the Assembly rooms on the corner of Brook Road to which my husband belonged.  I had many happy times and in later years I was the Women’s Section Standard Bearer for a good few years, going to the big rally once a year at the Albert Hall in London and St. Pauls Dedication Service.  It made me feel very proud to carry that Standard on Parade and to remember all our Forces who gave their lives to keep us free.  We had many years of playing Dominoes once a week with Uncle Fred (Edwards), the Ferryman, and Auntie Olive, playing for a prize at the end of the year.  He had sharp eyes for he always knew where the double six was.  We lived next door to them 54 years ago when we married and were good friends to the very end of their lives even though they moved to Southchurch soon after, but returned to Benfleet again in later years to become the Ferryman.

In 1939 War was declared.  I shall never forget the morning of the 2nd September, headlines on all papers and call up at 18 to 45 years old.  My husband joined the Special Police, his daily work at that time was on Chappells coal delivery.  He left home for work at 6-30 a.m. home at 5 p.m. and on duty most nights 8 to 12 p.m. We had a dugout in the garden, when the sirens used to go the youngsters would be in that and Grandma indoors.  She just would not go in it.   She used to say “if the Germans want to kill me I’ll die comfortable”.  Therefore I was the one who had to pace back and forth to see each was alright.  What nights they were and days when the Battle of Britain was on, especially when the incendiaries dropped in our garden and all over the fields in front.  One lot set on fire and burnt right out a bungalow in Kimberley Road.  The shrapnel rattled on the roofs all around.  Next door had all evacuated so we had to keep an eye on their place as well for fire.  Pop had a bad bout one night while on Policy duty, a Canadian plane came down on the marshes and he and two others had to gather up the human parts of the four airmen who were killed.

Life went on with many ups and downs during those 4 years. I remember the time the rocket fell on the Golf links damaging 36 bungalows and cracking our fishpond and letting all the water out so we had to scramble to save the fish.  There was also the time when Shell Haven was set on fire and we could read a paper in our garden by the light of it while it lasted.  Another episode I remember, my husband came home at midnight and said “there is something funny going on at the corner of Kimberley Road, I’ll have to investigate so put your coat on and watch me! At that time we had large bins at the corner of the roads for old tins etc., as the road was not made up.  Off he went with his truncheon at the ready to see who was making all the bangs in the bin.  It turned out to be a poor old ginger tom with his head stuck in a 2lb syrup tin, we managed to roll him in a sack and I held him while Pop cut the tin with his garden secateurs.  It was difficult as the cat’s head was so swollen, he was nearly mad and would soon have been dead.  We kept him until he was able to drink milk and then let him go.

I joined the W.V.S. and did what I could to help anywhere.  Eventually as the bombing got less the children began to return to Benfleet.  Some rooms were taken in Thundersley Park Road and a Teacher provided to teach them.  Then as things got better and they didn’t need the big school for the bombed out people, it was re-opened and life began to get back to normal.

Other events in my life, our Silver Wedding, we spent going to Hadleigh pictures to celebrate, was in there just 10 minutes, out we had to come into a heavy air raid, had to hurry home as best we could in the dark because our younger son and Grandma were on their own.  Our Golden one was very much better.  All the family and my cousins came home one day and all the neighbours the next.  Now I think I am coming to the end.  In 54 years of married life I have had many ups and downs, so at 77 with lovely birthday cards and many presents to look at I am as rich as any queen.

So many mercies I’ve received
So many friends so true
So many blessings given me
To test life’s work anew
When things looked black
And courage failed
I’ve known not where to turn
It’s then I’ve heard my Master’s Voice
That’s whispered very low
“Stay still” my friend and take my hand
And I’ll walk with you to the end.