On the area that is now the Bird Estate

The Benfleet British Army Camp
Description of how the local boys would exchange comics with the soldiers. 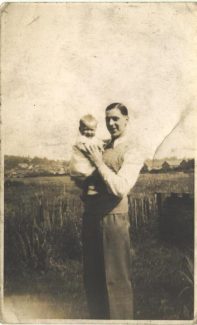 zoom
The Army Camp are the huts that can be seen in the background. This photograph was taken between 1942 -1944 in Woodham Road Benfleet looking towards the railway line.
Mrs Marion Turner (nee Reeves)

Dave Cowan talks about the Army Camp in the early 1950’s which was at the back of what is now the Bird estate.  Many of the soldiers were only known by what today would be regarded as their politically incorrect nicknames.

Apparently St Georges Church Hall in Rushbottom Lane is one of the old Army Camp huts that have been put to good service over many years, however it is now ready for replacement and fund raising is under way.