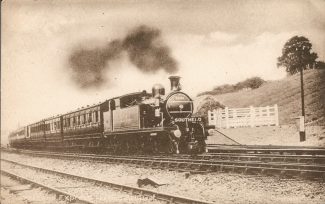 The Trains
Iris describes the excitement of the trains 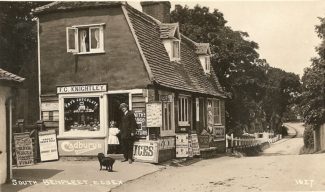 Knightley's
Iris describes her parents and when they took over Knightley's

The Anchor
Iris describes Ted Land the landlord of the Anchor

Dr Wilkes
Iris describes Dr Wilkes and a time he visited her when she was ill. 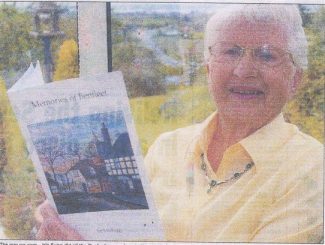 Drawing out the essence of old Benfleet

A long gone way of life is captured in a series of pictures painted by octogenarian Iris Sugg.

Within living memory, Benfleet could be described, with strict accuracy as a sleepy fishing village. It consisted of an ancient church, a row of centuries old cottages, a number of venerable taverns and a few well-weathered sheds associated with the wharf. The adjectives are interchangeable.

This once idyllic place has been well recorded in picture postcards and in old prints taken by local photographers. Such images capture the details of Victorian and early 20th century Benfleet, before the steamroller of development all but obliterated the old village. But they have one drawback as a record – they are always in black and white. As Iris Sugg says “you don’t remember in black and white, you remember in colour.”

Iris herself, now in her late 80s, recalls the greens of the fields that once reached the centre of the village, the rich browns of the elm trees, felled by disease, the burnt ochre of the Thames sailing barge sails, the terracotta tiles of the demolished cottages, the many different blues of the East Anglian skies and the pinks and violets of Thames estuary sunsets.

Working with a set of old postcards Iris has painted a series of pictures that show the fast-changing Benfleet she recalls from as far back as the early 1920s. The cards provide the accurate record, but Iris adds the missing element of colour.

Her project really took off full-scale after the death of her husband Ed two years ago when painting provided a refuge. The result of her industry is a series of depictions of old Benfleet, recalled as it was in the sunlight of more than 80 summers ago, seen through the eyes of a child.

Although Iris has sold some of her other pictures, she keeps the Benfleet landscapes close to her. They evoke too many memories for her to part with them. However, five of them are reproduced in a booklet, “Memories of Benfleet”, accompanied by a text. Iris’s word pictures are as colourful in their way as her paintings . They bring alive a world, a way of life and a manner of thinking that will seem almost bizarre to a 21st century mind. For instance when Iris’s widowed shopkeeper mother began to sell Sunday newspapers, she was denounced from the church pulpit by the local rector, the reverend Thomas Box.

Motor traffic was non-existent and Benfleet children led their lives out of doors . They could roam for miles over the Downs and the fields that touched the centre of the village. In summer they spent their lives by and in the creek.

The village dogs also roamed free and in winter the children harnessed them to sledges and toboggans to pull them up the hill. In the memorable winter of 1929 the creek and marshes froze solid, creating one vast skating rink, several square miles in dimension. The children took full advantage of this to skate all over the landscape.

In a world without computer games or ipods, the children found endless amusements in the world around them. If all else failed, there were always the railway engines at Benfleet station. They are remembered by Iris as “beautiful hissing and clanging black monsters with polished brass and shining steel.”

The children would stand on the bridge over the track, looking down at the driver, the fireman and the roaring firebox. As the train set off, clouds of steam would envelop the bridge. “Not being able to see each other made us scream and shout with excitement,” she recalls.

Iris’s mother and father ran the village shop. Long before the supermarket era, it provided the resident’s non-grocery needs, everything from bootlaces and sweets to confetti for weddings at the church. Like so many of his generation, Iris’s father returned from the first world war a shattered man, and he died from the effects of the ordeal in 1923.

Iris’s mother struggled on alone. Life must have been tough for her, but Iris and her siblings were too busy enjoying the delights of a village childhood to worry about any duff cards that life had dealt them. “Children nowadays spend their lives in front of screens,” says Iris. “We spent our lives out of doors, winter as well as summer” They also spent a large amount of time on what nowadays we would call people-watching.

This was a pretty rewarding activity when there were people around like Ted Land, proprietor of the Anchor inn, and a man who could be described as legless in more ways than one. Ted had lost his legs , and rode around in a bath chair, about the nearest thing the village had to road transport. Where his legs would have been, he always kept a pet lamb, of which there was a good supply from the Benfleet downs. Presumably the wool helped to keep his stumps warm.

There was also the scary local doctors, Wilkes and Grant. Dr Wilkes did his rounds on horseback, eyed up timidly by the local children. “He was a very smart, fearsome figure, 6 feet tall in the saddle, wearing brown leather riding boots” Iris writes. He would return any stare with a fierce gaze, emphasised by his use of a monocle. On one occasion, when Iris had rheumatic fever, he strode into her bedroom, still dressed in his riding gear and brandishing his riding crop. She recalls “I screamed so long and so loud that many of the customers came out of the Anchor to see what all the fuss was about.”

Then there was Ethel Jennings, the local washer-woman. Cut off from other humans by her total deafness, Ethel immersed herself in her world of soapsuds and starch. All day she heated coppers in her backyard, boiling and stirring the dirty clothes. All evening she ironed. Her real pride, though, lay in pegging out. Benfleet folk were borne to nautical knowledge, and Ethel applied her understanding of winds to the process of drying her washing. Her clothes line was one of the proud features of the village. “You could see Ethel’s beautiful washing from the Downs, propped high above the saltings to catch all the breeze,” Iris recalls.

In 1932 Knightley, the shop where Iris was born and raised, was demolished in a road widening scheme. The family and business moved to a new site across the road. Next door was the village grocery, Tuffields. This had recently been purchased by another family , the Suggs.

Iris grew up cheek by jowl with the Sugg boy Edmund. There was no love lost between the pair. “I couldn’t stand him. I avoided him” says Iris. Things changed, though, when Edmund matured into a handsome sea scout. Their shared love of the water brought them together, and in the end she married the boy next door.

After the second world war, Ed took over his parent’s business. The couple were a fixture of the village for decades, before they finally sold up to Thresher (though Iris still owns the freehold of the property).

During the second world war, Iris worked at a deciphering station at St Albans. The top secret operation involved copying down German radio transmissions. The transcripts were then passed on to the celebrated coding station at Bletchley Park. “We had to keep quiet about the work for 30years,” Iris says. Not even Ed could be told the exact nature of the work. Finally, a year ago, Iris received a medal and the freedom of Bletchley Park in acknowledgement of her services to her country.

War years apart, Iris has never lived away from her beloved Benfleet. She has absolutely no regrets about not taking in more of the world. “Some people travel restlessly all their lives, others stay put. This is where my roots are and this is where I have always been happy”

Iris Sugg’s words and paintings help to impart that sense of happiness to other people. “I have difficulty remembering what happened a week ago ,” she says, “but I can remember crystal clear what happened and how things looked 80 years ago.”