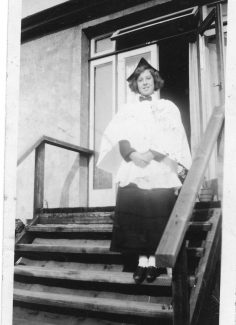 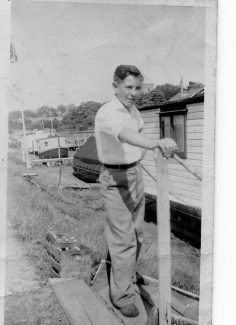 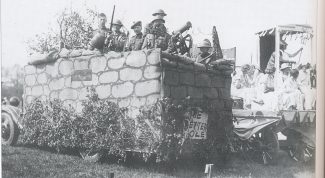 zoom
Phyllis Burnside is Britannia in the King George pageant 1935

Norma Harber writes that the Bucks side of the family arrived in 1920, while the Burnsides came 6 years later in 1926. Great grandmother Buck’s  husband George died in 1931 and shortly  afterwards she moved onto a houseboat to live. Their daughter Phyllis married William Burnside

Norma’s mother Doris Burnside, born in Benfleet in 1927, had three siblings  –   Victor, George and Sylvia.. of the four George and Doris are still alive.  First Victor and then George lived on the houseboat before going to Gravesend Sea School.  George remembers having to row across the creek to fetch water, half a penny a bucket.

Doris lived at  60 Hall Farm Road and trained as a seamstress with Shiner and Holmes (now the car showroom down by the station).

Norma’s grandfather, William Burnside, was a  builder in Benfleet and was responsible for building a tearoom on a pontoon  moored in the main creek, which great grandmother Buck ran solely for the weekend campers. These campers pitched their tents on the massive marshland field, now the recreation ground, the Hopes Green- side of St Mary’s church.

The tea rooms were open from Easter to the end of summer Later it was moved to Church Creek. She was licensed to sell tobacco and sweets. Houseboat folk also used her for bread and milk, often ordering in advance and collecting on their way home from the station.

Another George, this time Uncle George, worked for the butchers Tomlin and Son and is remembered for delivering meat on a bicycle by Iris Sugg.

Their upcreek neighbour was a Captain Brown who had been  skipper of the RMS Aquitainia. After the first world war he had bought up old pontoons and brought them to Benfleet for them to be turned into houseboats.  He  proved to be instrumental in getting  Victor and George into the Gravesend Sea School.